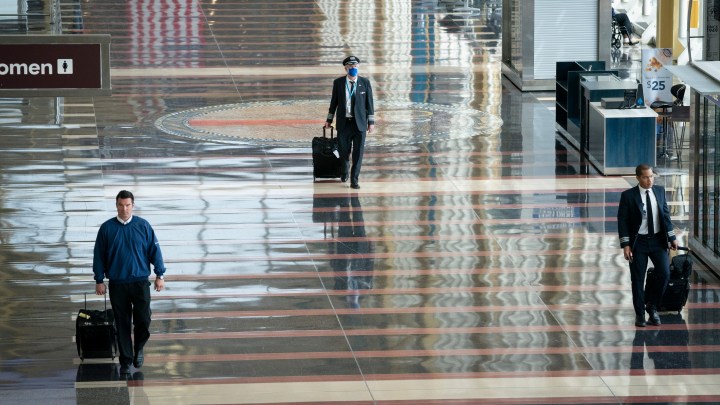 COPY
A pilot wears a face covering as he walks through a mostly empty terminal at Ronald Reagan Washington National Airport, May 5, 2020, in Arlington, Virginia. Drew Angerer/Getty Images
COVID-19

A pilot wears a face covering as he walks through a mostly empty terminal at Ronald Reagan Washington National Airport, May 5, 2020, in Arlington, Virginia. Drew Angerer/Getty Images
Listen Now

Before COVID-19, Andrew Mobley said he was on eight to 10 flights a month for his job. He’s in sales for RealPage, a property management software company.

He lives in Dallas, but his territory is California and Arizona.

That’s the flight, hotel, rental car, per diem, taking clients out to dinner. He said in March that all stopped. He’s doing everything by Zoom these days.

“I think it’s shown that we don’t necessarily need the travel,” he said. “It’s not as required as it once was, before technology, you know, before we had Zoom and even teleconferencing.”

Mobley hasn’t heard anything official yet about whether his bosses will send him back on the road once the pandemic ends, but he expects his company will scale back the travel budget.

It’s just so much cheaper to stay put.

Chris Anderson, professor at Cornell University’s School of Hotel Administration, said pretty much every company is having the conversation about the value of meeting clients in person versus connecting over the computer.

“For the most part, we’re super productive in this model. And so I think that what that means is, there’s going to be some hesitation in the business sort of side of things to go back to the way things were,” Anderson said.

Anderson said he could see as much as 25% of business travel never coming back.

Last month, Bill Gates said he thinks that over 50% of business travel won’t come back after the pandemic, which has major implications for the airline industry.

Those who travel for work make up around 10% of airline passengers, but they account for between half and three-quarters of revenue. Business class is more expensive, so the profit margin is higher.

Anderson said business travelers will probably be paying more for flights for a while as airlines deal with diminished demand.

“They’ve parked a bunch of capacity in the desert. They’re not sort of taking on new planes as quickly as they would have otherwise,” he said. “And so what that means is that will be another barrier to business travel, because it’s not going to necessarily be cheap to travel, as the airlines are slow to add that capacity.”

Alan Andrews isn’t all that concerned about the price of a business class plane ticket.

He just wants to get his 50 to 60 sales reps out of their home offices.

His sales team in China is already meeting with customers in person and he’s looking forward to that day in the U.S. He said so far there’s been no talk of his company reducing its domestic travel budget after the pandemic ends.