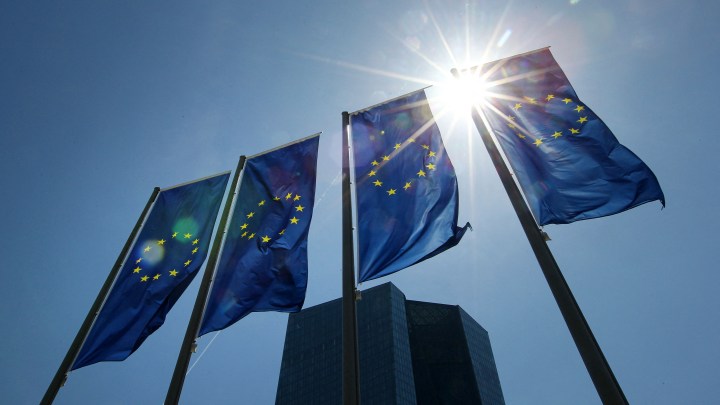 COPY
Europe has not yet reached pre-pandemic employment or output levels, and the ECB has signaled an interest rate hike next month. Above, the European Central Bank headquarters in Frankfurt, Germany. Daniel Roland/AFP via Getty Images

Europe has not yet reached pre-pandemic employment or output levels, and the ECB has signaled an interest rate hike next month. Above, the European Central Bank headquarters in Frankfurt, Germany. Daniel Roland/AFP via Getty Images
Listen Now

The United States is not alone in dealing with tenacious inflation, and the Federal Reserve isn’t the only central bank trying to get it under control by hiking interest rates.

A few dozen central banks around the world have been hiking rates — in England, Mexico, Canada, Argentina, India, South Africa and Australia. Brazil and Saudi Arabia raised rates just after the Fed did Wednesday. The European Central Bank has signaled it’ll follow suit next month.

​On Wednesday, during his press conference, Fed Chair Jay Powell tried to put inflation here into a global context: “It’s not just here. In fact, we’re sort of in the middle of the pack. Although I think we have, of course, a different kind of inflation than other people have, and partly because our economy is stronger and more highly recovered.”

​In other words, every country’s economy is different and some may be more vulnerable to inflation, higher interest rates — and recession — than ours. There are global forces driving inflation in pretty much all economies, and they’re really hard to tame with interest rates alone.

“Pressures on commodity prices like energy and food — largely driven by Russia’s invasion of Ukraine,” said Joseph Gagnon at the Peterson Institute for International Economics. “COVID shuts down factories, creates problems in the shipping industry. That affects many countries.”

But there’s a big difference between the U.S. and many other countries: We had such massive government stimulus to businesses and households that we’ve recovered to pre-pandemic employment and gross domestic product. Others haven’t been so lucky.

“Europe and Japan are not back to the previous level of employment or output,” Gagnon said.

Europe’s also got an even bigger problem dealing with oil and gas inflation because, unlike the U.S., it produces hardly any of its own, said Michael Pearce at Capital Economics.

“American consumers complain about paying $5 for gas, but the energy squeeze in Europe has been a lot more severe, including on households’ energy bills,” he said.

All that means that as central banks hike interest rates to try to fight inflation, Europe and other weaker economies are closer to tipping into recession. The risk is even higher for poor countries. Many depend on grain exports from Russia and Ukraine, said Columbia University political economist Sharyn O’Halloran.

“Africa and the Middle East are always on these knife-edge situations, so these types of disruptions can be very significant,” O’Halloran said.

The U.S. has one other big advantage globally, said Jay Hatfield at Infrastructure Capital. “The rest of the world follows the Fed. So whenever they raise rates, the other countries are really forced to do it to defend their currencies.”

That preeminence means capital will keep flowing into the U.S. from weaker economies, and the domestic economy might just be able to avoid tipping into recession.