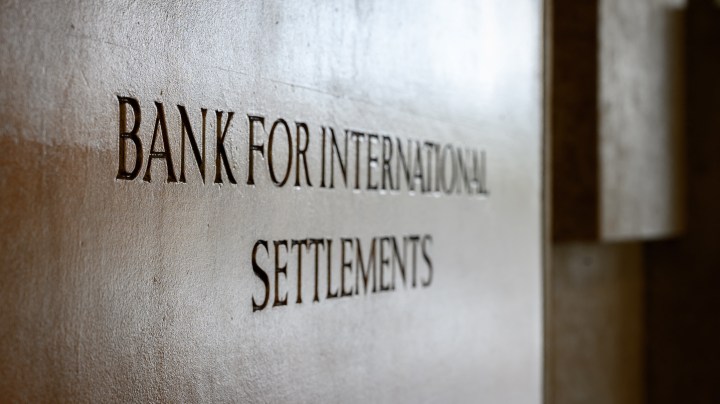 COPY
The Bank for International Settlements warned that “inflationary psychology” could become entrenched and self-reinforcing. But the effort to douse inflation comes with risk of its own. Fabrice Coffrini/AFP via Getty Images

The Bank for International Settlements warned that “inflationary psychology” could become entrenched and self-reinforcing. But the effort to douse inflation comes with risk of its own. Fabrice Coffrini/AFP via Getty Images
Listen Now

​​Later this week, we’ll get a sense of how well the Federal Reserve here in the U.S. has been doing on that front when we get the next monthly report on personal income, spending and inflation from the Bureau of Economic Analysis.

​Meanwhile, the global hub of central banking — the central bank of central banks — met over the weekend in Basel, Switzerland. The Bank for International Settlements warned the Fed and its compatriots that they have “a narrow path ahead” to bring the global economy in for a so-called soft landing.

The central banks of the world talked about inflation when it started showing up as the global economy rebounded from the pandemic last year. But it only got worse.

So they started hiking interest rates, left, right and center. Because they really mean it. They’re gonna whip inflation. Now.

“The central banks are somewhat in a state of panic,” said Adam Posen at the Peterson Institute for International Economics. “The banks have all agreed they’re on team catch-up. They all think, ‘We’re behind the curve.’ They have to raise rates fast to keep inflation under control — not just to bring it down, but to keep it from accelerating.”

In other words, to avoid a combination of inflation and stagnant economic growth, known as stagflation. That’s why the Bank for International Settlements warned that “inflationary psychology” could become entrenched and self-reinforcing.

The key to success, according to Ross Mayfield at Baird, may be to sound like you’ll succeed.

“Their jawboning and their messaging is a huge part of the battle — managing inflation expectations in particular.”

Mayfield said that if the Fed, for instance, can convince investors, businesses and consumers it’s ready to get inflation under control — even if that means raising rates high enough to cause a recession — that in itself could drive down inflation expectations and ease the risk of a recession.

But that requires credibility, per economist Douglas Holtz-Eakin at the American Action Forum.

“The Fed’s problem is it had to admit that it got it wrong last year,” he said. “It thought inflation would go away, publicly said it was ‘transitory,’ even when it was clear it was higher and more durable than they’d expected.”

And inflation got out of hand. “Now, they have to flip 180 degrees and convince people that they’re serious about controlling inflation, and they’ll finish the job and they have the skills to do the job. I’d say the jury’s out,” Holtz-Eakin said.

He’s keeping an eye on the trend in home prices and rents as early indicators of whether or not the Fed’s getting it right.