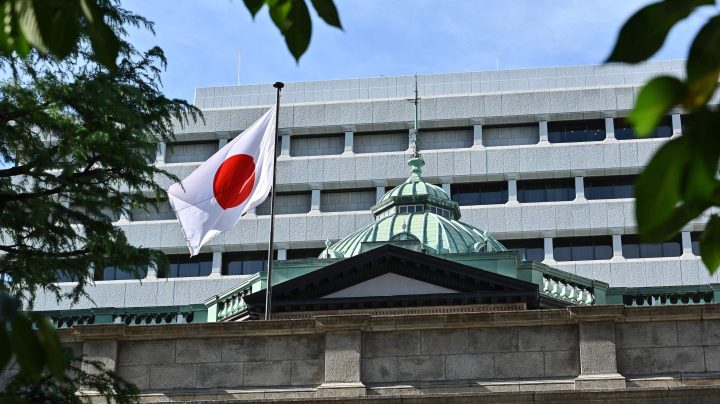 COPY
The Bank of Japan headquarters in Tokyo. The BoJ has kept interest rates low to prop up the economy, but the side effects include a depreciating currency. Richard A. Brooks/AFP via Getty Images

The Bank of Japan headquarters in Tokyo. The BoJ has kept interest rates low to prop up the economy, but the side effects include a depreciating currency. Richard A. Brooks/AFP via Getty Images
Listen Now

After the Federal Reserve raised interest rates Wednesday to tamp down inflation, central banks in the U.K., Switzerland and Norway followed suit Thursday. The European Central Bank is almost certain to do the same in a few weeks.

There was a notable exception, though. The Bank of Japan decided to keep its rates near zero — and said it expects that to be the case for some time.

Japan is dealing with inflation just like everybody else is. But its government is facing another big problem: the falling value of the yen.

Relative to the dollar, the currency’s value has fallen by more than 20% this year.

That’s in large part because the Bank of Japan has kept interest rates low, while the Federal Reserve has been raising them. And that makes Japanese government bonds less attractive to investors.

“They sell Japanese yen and buy U.S. dollars, so that leads to the yen’s depreciation,” said Sayuri Shirai, an economics professor at Keio University in Tokyo and a former member of the Bank of Japan’s policy board.

She said the bank is keeping interest rates low to prop up Japan’s economy after the pandemic by helping people with mortgages and business loans.

“There are still many small and medium enterprises that are suffering, and so they need to borrow money from commercial banks. So if the interest rates start to go up, that’s very bad for them,” Shirai said.

A weak yen can be a good thing, especially for Japanese manufacturers, since it makes their exports cheaper.

But Takatoshi Ito, an economics professor at Columbia University, said Japanese exports have been slow.

“So the benefit seems to be less than before, while the costs from the imported inflation, especially energy and food, seems to be high,” Ito said.

The Japanese government is trying to boost the yen by buying its own currency and selling off reserves of other currencies.

But Christopher Vecchio at DailyFX said Japan can only do that for so long.

“As those [foreign exchange] reserves wind down, they have less ammunition moving forward to try to prop up the value of the yen, plain and simple,” he said.

And as the Fed keeps hiking interest rates, it’ll be even harder for Japan to prop up the yen.