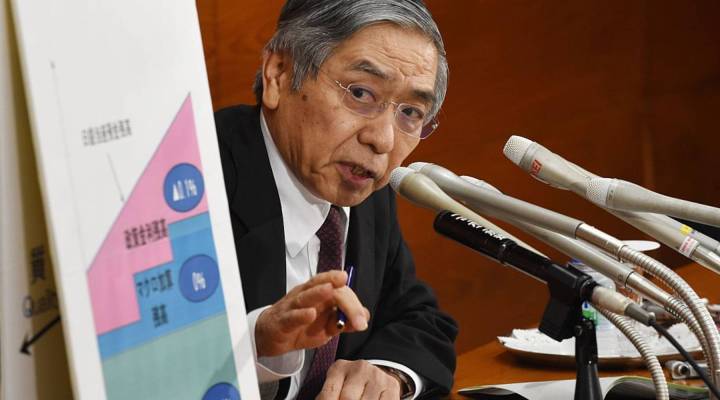 COPY
Governor of the Bank of Japan (BoJ) Haruhiko Kuroda explains his negative interest rate plan using a board during his regular press conference in Tokyo on January 29, 2016. OSHIFUMI KITAMURA/AFP/Getty Images

Governor of the Bank of Japan (BoJ) Haruhiko Kuroda explains his negative interest rate plan using a board during his regular press conference in Tokyo on January 29, 2016. OSHIFUMI KITAMURA/AFP/Getty Images
Listen Now

There are boat loads of cash parked at Japan’s central bank, the Bank of Japan. It’s holding piles of yen for the commercial banks, and paying out a little interest.

But now, with negative interest rates, the Bank of Japan will be charging banks minus 0.1 percent to hold their money. This will only apply to some new deposits.

“The intention is to try to reduce the banks’ willingness to keep money parked, and instead to try to lend it out or to buy some other securities,” said Anil Kashyap, an economist at the University of Chicago Booth Scho0l of Business.

The idea is to spur economic growth — maybe even ignite a little inflation.

But people — even banks — in Japan don’t like spending money. They spent years in a deflationary spiral. Prices just kept falling. People, and banks, saved their cash because — why buy something today when its price will be lower tomorrow?  So, will the negative interest rate work?

“That’s the one trillion yen question,” said Michael Taylor, a senior economist at Oxford Economics in London. “In terms of the banks rushing out and reallocating these reserves toward bank lending, I’m very skeptical about that.”

But Taylor said the banks might have better luck buying stocks or bonds.

They have made some investments like that — but in other countries.

“There’s a certain barrier here to really changing the economic behavior,” said Sheila Smith, a senior fellow for Japan studies at the Council on Foreign Relations.

Smith said it’s especially hard to change that behavior when much of the rest of the global economy is so uncertain.