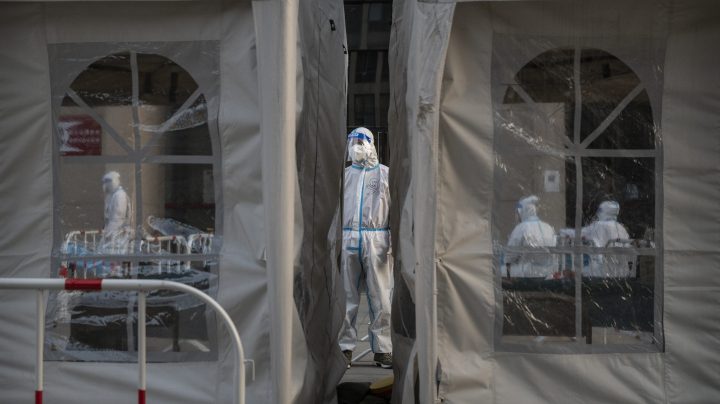 COPY
Strict anti-coronavirus measures are hindering electronics manufacturing and other business in China. Above, workers in protective gear at a mass testing site in Beijing. Kevin Frayer/Getty Images
COVID-19

Strict anti-coronavirus measures are hindering electronics manufacturing and other business in China. Above, workers in protective gear at a mass testing site in Beijing. Kevin Frayer/Getty Images
Listen Now

The conflict in Ukraine shows no signs of abating, and global supply chains have been affected by sanctions and other disruptions in recent weeks. Now they’re being further snarled by a more familiar agent of chaos: omicron.

The city of Shenzhen, a key Chinese manufacturing hub, is on full lockdown this week after recording a surge in COVID-19 cases. Shanghai and several other major cities are also under severe COVID restrictions. By American standards, China’s virus surge is relatively small, but its zero-tolerance response is nevertheless having a major impact on American companies.

The tech manufacturer Foxconn, which helps make Apple iPhones and iPads, is shutting down its factories in Shenzhen for at least this week, which is obviously not good for Apple. But analyst Angelo Zino at the consulting firm CFRA said the timing could have been worse.

“If this were to happen, let’s say, around September or October or around the holiday selling season, I think it’d have much more implication,” Zino said.

Manufacturers in Shenzhen can temporarily relocate production to other parts of China, but if omicron spreads throughout the country, what alternatives do companies like Apple have?

“In the immediate near term, they really don’t have much, to be honest with you,” Zino said. Many U.S. firms are exploring longer-term plans to relocate portions of their supply chains to India or even reshore them to the U.S.

David Dollar is a fellow at the Brookings Institution. He said even if U.S. companies are reluctant to criticize the Chinese government publicly, “I think privately they’re telling the government this is really hampering their activity,” Dollar said.

Still, he doesn’t expect China will relax its COVID policies before the end of the year. And when you add that to tariffs, sanctions and, now, Chinese support for Russia — which became a global outcast after its invasion of Ukraine — “there are quite a few U.S. businesses that are rethinking their relationship to China,” he said.

While China’s strict COVID policies are hurting U.S. businesses, they could also hurt Russian ones.

Inu Manak is a fellow at the Council on Foreign Relations. “There are rumors that China would help Russia economically. Well if China’s facing its own concerns, I don’t know how much it can help,” she said. Locked-down Chinese cities could reduce demand for Russian oil and gas, she said.