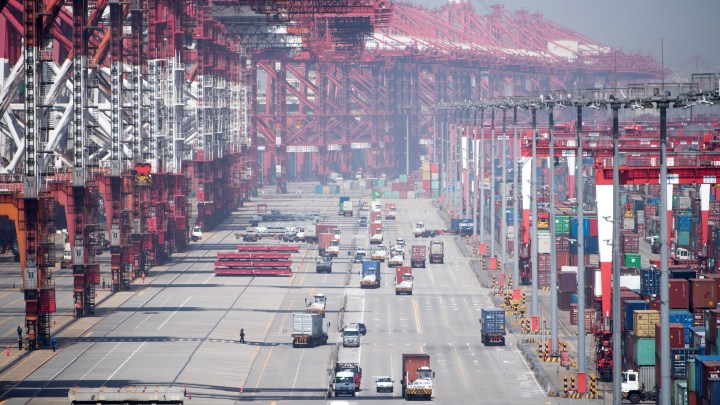 COPY
The Yangshan Port near Shanghai. Even goods and cargo are tested for COVID-19 under China's aggressive anti-contagion policy. Johannes Eisele/AFP via Getty Images

The Yangshan Port near Shanghai. Even goods and cargo are tested for COVID-19 under China's aggressive anti-contagion policy. Johannes Eisele/AFP via Getty Images
Listen Now

2022 started off with far fewer business inquiries for one manufacturer of nuts and bolts in eastern China. One-third of Jinan Star Fastener Co.’s customers are in the U.S.

“The situation won’t be very good this year. So, if we can keep the same level of sales as last year, then it’s not bad,” said the firm’s sales director, Zhang Yuhua.

Even this very modest expectation might be tough to meet. China is set to release its economic data for the first three months on Monday.

The world’s second-largest economy is facing several challenges, including the fallout of the Ukraine war and the COVID-19 pandemic. Initially, there was an expectation that the war might be painful, but brief. Yet it continues to drag on.

“Already a number of factories along China’s coast have suspended at least a part of their production lines because the raw material prices are increasing so rapidly, they just can’t really contain all those costs,” Wang said.

Add in the global pandemic to the supply chain problems, and the mess gets bigger and more expensive. According to some estimates, between 45 and 87 cities in China have some form of COVID restriction under the country’s zero-tolerance policy.

Ian White, founder of San Diego-based TUK Shoes, mostly manufactures his shoes in China and exports them to the U.S.

There have been obstacles “getting equipment, getting bookings on the vessels and then [the vessels sit] out in L.A. in the harbor and around, all the way down to Mexico,” he said. “It [could] be COVID in China and closing the port down.”

The latest surge in COVID infections in China is concentrated in Shanghai, the financial hub with 25 million people, which mostly remained open throughout the pandemic until the recent case spike.

Officially, the Shanghai port is open for business. It’s a different story in practice.

“The fact is that our carriers, the trucks with containers, are not allowed to enter or leave from Shanghai,” said Cathy. She works with a Japanese underwear manufacturer that didn’t authorize her to speak to Marketplace, so we withheld her surname.

She said her customers could miss out on a whole season of clothing, and that’s just the impact of the first four days of a partial lockdown in Shanghai.

The city is a major manufacturing and legal services center as well as a financial hub, contributing nearly 4% of China’s gross domestic product.

“At least in the first quarter, we’re probably looking at a negative GDP rate [year over year], and in the second quarter, I would be very surprised if [growth] is more than 2%,” Wang said.

The biggest unknown is how long it will take for Shanghai to lift the lockdown, though it’s the same in other cities. The national leadership in Beijing seems set to maintain zero tolerance for COVID, which means consistent mass testing — even for cargo at the Shanghai port.

“Even the goods should be checked by a hospital, I heard. So I was very surprised about that,” Cathy said. “Every day, we pay extra at least about 3,000 yuan,” equivalent to $470.

For each delivery, her firm has to bear the cost of the products being tested for COVID. “It’s very difficult for me to describe this to our customers in other country because they, they cannot believe why the goods should get checked,” she said.

Especially when many other countries are opting to live with the virus and open their economies.