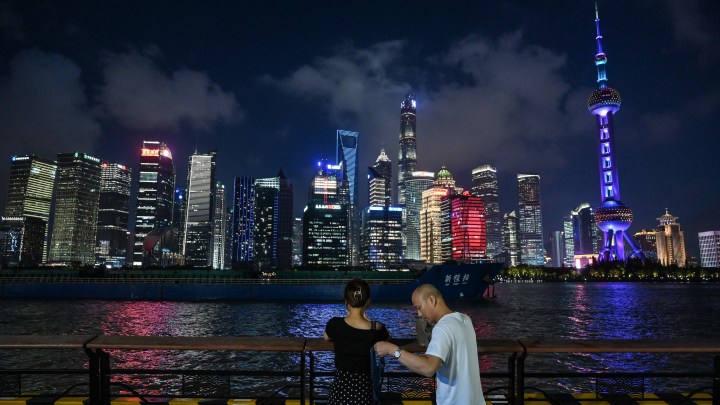 COPY
A view of the Lujiazui financial district in Shanghai. Hector Retamal/AFP via Getty Images

A view of the Lujiazui financial district in Shanghai. Hector Retamal/AFP via Getty Images
Listen Now

One of the big economic stories of the day is the Chinese economy — which is growing at a much slower rate than before. China, of course, is at the center of the global supply chain, and it’s the source of many of the products that are stuck on ships and in rail cars right now.

But the country’s also facing economic troubles at home.

One big problem is China’s electric power supply. The grid still relies heavily on coal, and lately coal has been in short supply.

“There was a natural disaster. There was some flooding that flooded parts of where they’re producing coal,” said Damien Ma, managing director of the think tank MacroPolo at the Paulson Institute.

He said the factories that need that coal are having trouble making products other countries are buying.

“It’s really heavy industry in China, like steel, that is really facing the brunt of the power shortages, in part because they’re the biggest energy guzzlers,” Ma said.

Meanwhile, China is implementing strict COVID safety measures at factories and ports, according to Christopher Balding, a senior fellow at the Henry Jackson Society.

“So, whether it’s one individual that works at the port, or whether it is potentially one shipment in an entire port that tests positive for COVID, they will shut down the entire port for one to two weeks,” he said.

Ports can always reopen, and China has plenty of coal it can mine, said Anne Stevenson-Yang at J Capital Research.

Lately, there have been signs that the real estate market could be starting to crack. Stevenson-Yang said that could have a big impact on the wealth and purchasing power of Chinese consumers.

“And then you’re going to have secondary effects on international companies that have big businesses in China,” she said, mentioning General Motors, Procter & Gamble and Unilever.

Moody’s estimates that the property sector and related industries make up nearly a quarter of China’s gross domestic product.