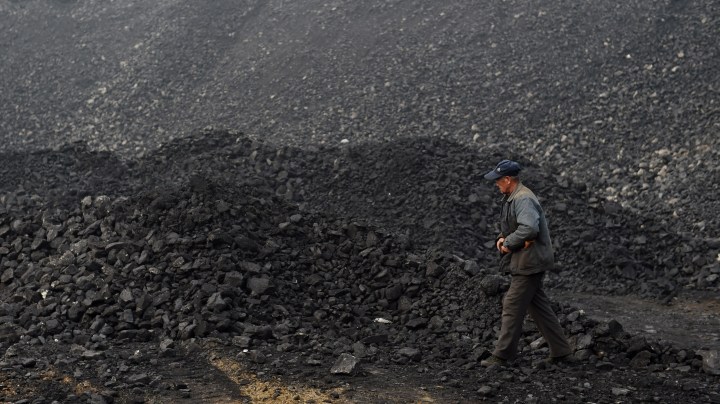 COPY
Piles of coal at a Chinese mine. Production of the carbon-intensive fuel has been cut back, contributing to the increase in its price. Greg Baker/AFP via Getty Images

Piles of coal at a Chinese mine. Production of the carbon-intensive fuel has been cut back, contributing to the increase in its price. Greg Baker/AFP via Getty Images
Listen Now

The price of natural gas is spiking right now, more than double what it was in the U.S. just last year, and it’s way more expensive in Europe and Asia.

A similar thing is happening with coal, where supply shortages are pushing prices to record highs as well. But for all its stigma, coal is pretty entrenched. It still generates more than half the energy in China, the world’s second-largest economy.

“You know, a lot of times there are situations in which basic supply and demand can lead you in the wrong direction. And this is not one of those,” said Steve Cicala, an economist at Tufts University.

Despite the demand, coal production in China has been muted because of COVID and that country’s carbon emissions targets, he said.

On top of that, political disagreements with Australia led the Chinese to outlaw importing coal from there. Plus, in China, electricity prices are regulated, but coal prices are not, said Clark Williams-Derry at the Institute for Energy Economics and Financial Analysis.

“So, the result is that a lot of coal-fired power plants don’t want to produce more electricity because it’s more expensive, very expensive for them to buy coal. But they’re not getting any more revenue from their electricity sales,” Williams-Derry said.

Coal producers in the U.S. would like to take advantage of these high prices, but the infrastructure is just not there, according to Ian Lange, an economist at the Colorado School of Mines.

Terminals in states like Washington and Oregon have been stalled for years. But with U.S. natural gas prices at their highest level in over a decade, Williams-Derry said, some electricity providers are shifting their inputs to coal — and that’s a tougher ask for the industry now.

“The coal industry has had to cut, cut, cut production, has been cutting staff, has been cutting output, has been reducing its capital spending, so it doesn’t have, necessarily, the flexibility to ramp up at a moment’s notice,” he said.

High natural gas prices without a viable alternative — which for a long time was coal — could lead many electricity companies to invest even more in wind and solar to diversify their power supply, Williams-Derry said.