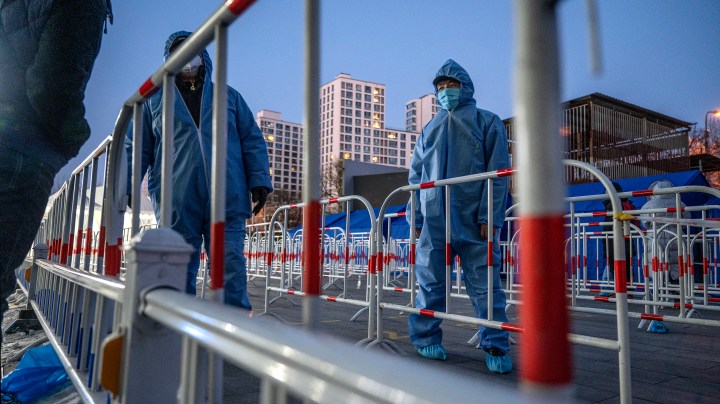 The world’s best athletes are in Beijing competing in the Winter Olympics, which officially kicked off last week. China has pledged to hold a safe Olympics despite the highly infectious omicron variant of the coronavirus circulating. Athletes, journalists and venue staff are cut off from the public.

The country has had a lot of practice. For the past two years, China has been living in its own bubble and kept its borders largely shut to outsiders.

As I made my journey from Canada to China, I had a close-up look at its zero-COVID policy.

When my parents dropped me off at the Calgary airport last month, it felt like a triumph. I had gone home to visit my family and avoided catching COVID-19. But, if I had caught it — even if I had recovered — Chinese authorities wouldn’t have allowed me to return for at least a few months.

My victory was short-lived. At the check-in counter, the airline staff said my flight was delayed for two hours, which meant I would miss my connection to Shanghai. The next available flight was scheduled the following day. A flight delay might be annoying in pre-pandemic times, but China’s zero-COVID testing requirements make it a nightmare.

The airline assured me it would accept my COVID test results even if the test was taken beyond the 48-hour requirement. However, the Chinese Consulate, which I need permission from to fly, indicated it would not accept results that were more than two days old. I redid the tests and prayed that the results would be ready in time.

In the end, I made the flight but my stomach was still in knots.

After initially mishandling the outbreak, Chinese officials clamped down to create what has become the zero-COVID policy. Infections have been low. On Sunday, China reported some 1,500 domestic cases, bringing the total since the start of the pandemic to just over 106,000. That is less than one-third of the daily average of 378,000 in the U.S. as of Wednesday. While there is skepticism about the accuracy of China’s numbers, what isn’t in dispute is that Chinese factories were the first to resume production and kept churning out the products Americans were ordering online when most of the world was shut down.

However, this comes at great personal cost.

Wu Fenghe sells engine oil to car garages. In August, after an outbreak of 20 cases in the city of Wuhan, he suddenly wasn’t allowed to leave his home.

“My area was in lockdown for over 15 days. I had no income. I couldn’t go out to sell or deliver products,” Wu said. Still, he said he supports the strict measures.

“The stricter the government measure, the earlier the pandemic ends, the better it is for us that we don’t have to face another lockdown.”

There is widespread public support for China’s handling of the coronavirus.

Though that is slowly changing in areas like Ruili, which borders Myanmar. The city has had four lockdowns over the past 18 months; the longest lasted 44 days. In between lockdowns, there were many complex quarantine and testing requirements to enter or leave the city.

“At the start of the pandemic, people supported the prevention measures. But after so many lockdowns, residents are starting to resist. The economic loss they’ve suffered is too high,” a Ruili resident surnamed Deng said. She only gave her last name out of fear of official retaliation. Deng has been censored for speaking out before.

When I arrived at the Shanghai Pudong airport, I felt lucky. China has been suspending more flights from Canada and the U.S., citing COVID prevention.

The U.S. Department of Transportation has retaliated. There are basically no direct flights from the U.S. to China until March.

In a survey of some 300 member companies of the American Chamber of Commerce in Shanghai, 53% of them said China’s COVID-related travel restrictions made it hard for them to attract or retain foreign talent.

China’s stance against COVID can be draconian.

In December, the northwestern city of Xi’an went into lockdown. Local hospitals enforced such strict COVID protocols that they turned away two pregnant women who later suffered miscarriages.

A video of one of the women sitting on a plastic bench with blood on the ground enraged social media users in China. The footage has been mostly scrubbed from the Chinese internet.

Health officials apologized for one of the cases, and senior hospital staff have been suspended or fired.

Another Xi’an resident said her father had been suffering heart problems but was turned away by multiple hospitals because of COVID measures. He later died. The posts were later removed from her social media feed.

Back in Shanghai, I passed the facial scan at immigration, but then I was reminded that the U.S. and China are still in a trade war. Three officers took turns checking my paperwork. They seemed unsure whether U.S. journalists were allowed to reenter China.

Eventually, I got through. Despite vaccination, the rules are the same for everyone entering China. All inbound passengers must quarantine for 14 days in a government hotel, in addition to whatever their destination city requires at their own expense.

In Shanghai, where I live, the restrictions are usually milder, but now the metropolis has stepped up its prevention measures.

For example, on Day 4 of my quarantine, a woman in a full hazmat suit came into my hotel room to do a PCR test, which consisted of one swab for the mouth and another so far up the nose it felt like my brain had been tickled.

By Day 14, as the omicron variant was detected in Shanghai and other places in the country, the PCR was amped up to four swabs for the nose and mouth. Plus, the doorknob, my pillow and cellphone were swabbed for COVID after Chinese officials pointed to overseas packages as a source of infection. The theory has been questioned by Western scientists. Eventually, a senior Chinese health official conceded there is insufficient evidence that the recent locally transmitted COVID cases were caused by foreign mail.

Once my cellphone, doorknob, pillow and I were given a clean bill of health, I was released from the hotel on Day 15. A man in a hazmat suit followed behind with a big plastic container. He sprayed disinfectant on every surface I touched as I exited the hotel.

They sent me home in a van lined with plastic. The seat was soaked with disinfectant. I was the only passenger inside to avoid physical contact with other passengers. I arrived home to be greeted with the new rule: Instead of seven days of self-reporting my health status and avoiding crowded places, I would not be able to step outside my door for a week.