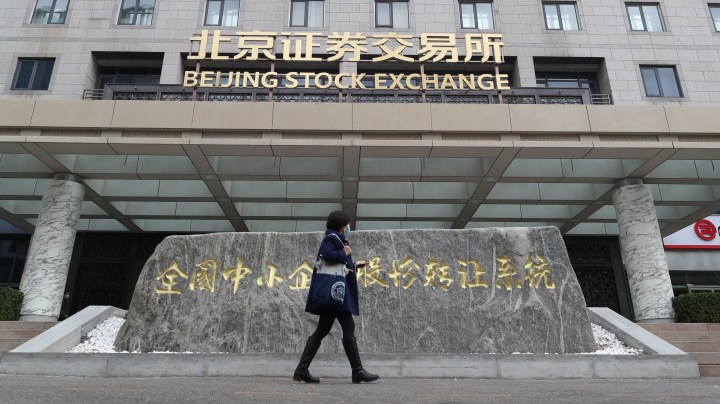 COPY
China isn't "growing at 10%, but they’re still growing faster than everyone else,” an expert says. The nation's share of global trade has expanded as well. Emmanuel Wong via Getty Images

China isn't "growing at 10%, but they’re still growing faster than everyone else,” an expert says. The nation's share of global trade has expanded as well. Emmanuel Wong via Getty Images
Listen Now

The two nations’ economic relationship is not expected to be front and center in this meeting, but it is hovering in the background. China’s economy performed well through the pandemic. While it’s now tapering off, some parts — especially those related to trade — are still booming.

China was the world’s only major economy to escape recession during the pandemic. Growth fell to a mere 2.3%, according to the International Monetary Fund. And from there, it bounced back with a fury.

“In the first half of 2021, it was growing like gangbusters, 12.7% real growth from the year before,” said David Dollar, a senior fellow at the Brookings Institution.

“The data coming in suggest that after the first half of the year, the Chinese economy has really skidded to a halt,” Dollar said.

Between the second and third quarters, real gross domestic product growth was only 0.2%, per Nargiza Salidjanova, director of China projects at Rhodium Group.

China still has a zero-tolerance COVID policy and isn’t shy about returning to lockdowns when there are suspected cases. The government has also cracked down on some sectors, like property and tech, which it says have escaped regulation for too long. Still, the IMF expects China’s economy to grow 5.6% next year — low for China, but not bad.

“Yeah, they’re not growing at 10%, but they’re still growing faster than everyone else,” said Nicholas Lardy, a senior fellow at the Peterson Institute.

China is attracting foreign direct investment rapidly, he said. And as world trade shrank in 2020, China’s trade activity grew and is still growing.

“They’re increasing their share of global trade quite dramatically,” Lardy said. “China’s managing to increase both its imports and its exports this year by over 30%.”

And Lardy pointed out that China is doing so without the extended port clogs the U.S. is experiencing and managing to keep inflation low as well.