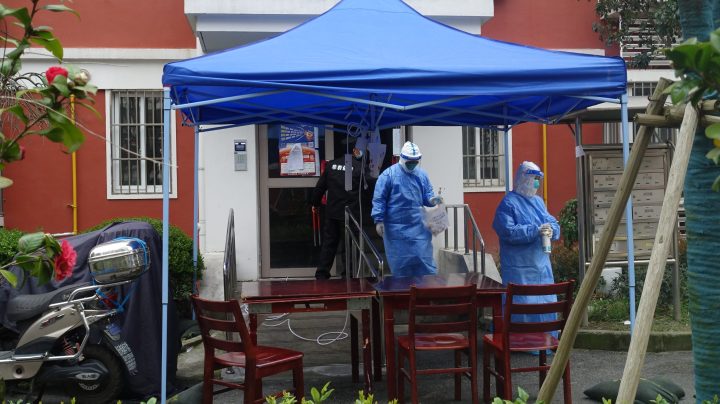 COPY
Medical workers in Shanghai exit a residential building that has been sealed. Shanghai has done mass testing in this latest surge of COVID-19 cases. Charles Zhang/Marketplace
COVID-19

Medical workers in Shanghai exit a residential building that has been sealed. Shanghai has done mass testing in this latest surge of COVID-19 cases. Charles Zhang/Marketplace
Listen Now

Shanghai has widened its lockdown since Monday, shutting down half the city at a time. The financial hub of nearly 25 million people has been experiencing a surge of COVID-19 infections not seen since the start of the pandemic. Cases in Shanghai shot up to account for 64% of the 7,000 national cases on Monday, far below the nearly 28,000 infections the U.S. averaged this past week. However, the latest surge of infections has worried the Chinese government, which has a zero-tolerance approach to the virus.

In response to the highly infectious omicron variant, government officials have emphasized a so-called “dynamic clearance” strategy, executed differently in each city.

Shanghai officials say they are using targeted, shorter lockdowns and quicker mass testing to stamp out infections. In theory, this would cause fewer disruptions to the Chinese economy than a city-wide lockdown. However, living through such a strategy is jarring.

The first time my building was under a lockdown nearly two weeks ago, Shanghai officials didn’t call it a lockdown. Instead, my community was put under “closed-loop management,” which meant a couple of COVID-19 PCR tests in two days.

Shanghai is conducting mass-testing block by block and enforcement varied. While some of my friends cannot step past their front door, I am still allowed to go grocery shopping. There is a decent selection at my local supermarket although leafy vegetables are snapped up quickly. Shanghai officials say there is no need to panic buy, but I have friends who have been trying for days without success to get grocery delivery.

The “closed-loop management” is supposed to last 48 hours. On day three however, two Fridays ago, there was no update until a megaphone blared outside my windows at 11 p.m.

“The lockdown continues tomorrow. There will be a second round of PCR tests. Please plan accordingly for tomorrow,” was the announcement.

Things could be a lot worse. Authorities have in the past shut down a port over a single COVID case, tossing global supply chains into disarray. Two weeks ago, the high-tech hub of Shenzhen, where some Apple products are manufactured, announced it had lifted a city-wide lockdown after seven days.

However, a video circulating online indicated at least one area was still sealed off and had been for nearly three weeks. Residents were seen lining the gates of their compound and shouting, “Lift the lockdown!” Their request was reportedly granted after the video came out.

Another video that went viral showed a man breaking down when he was not allowed to work.

“I am not endangering society,” the man said to policemen while slapping his hands on both sides of his head repeatedly. “I want to live. I need to support my family. Do you want me to die?”

China is aggressively attempting to stamp out the new virus in part because there are still 52 million people over the age of 60 who are not fully vaccinated.

Mass testing is one way to catch infections before they spread.

Over the course of five days, I was required to do four PCR tests and the process was rather quick.

Prior to each test, I filled out personal information through a centralized app and obtained a QR code. Medical staff at the testing site scanned the QR code, pulled out a cotton bud, swabbed my mouth a couple of times and put it in a tube with a bunch of other samples. If someone within that sample tested positive for the coronavirus, then that group of people would be required to do further PCR tests.

By using this method, China has been able to test tens of millions of people within a matter of days. For two years, China has largely kept the coronavirus under control, which allowed its factories to be among the first to resume production when much of the world was shut down. People question whether this same strategy is working with the more infectious variant of the new virus.

Testing labs in Shanghai are overwhelmed; I still have not received the results for my third PCR test.

Shanghai’s testing and lockdown strategy is in full swing at a time when the other financial hub, Hong Kong, seems to be easing some COVID restrictions. Hong Kong officials say it will allow flights from previously banned countries starting next month (including the U.S.), as well as shorten quarantine for some inbound travelers, a relief to global businesses based there.

Throughout the pandemic, Shanghai has been considered more measured in its COVID protocols but has never faced more than a few dozen cases until now. On the first day of my lockdown, March 16, there were 170 cases in Shanghai and the numbers have grown 26-fold since then. The majority of the people infected experience light symptoms or are asymptomatic.

The consequences for those who catch COVID are the same across mainland China. Those who test positive for the new virus, their contacts and their contacts’ contacts are quarantined in a government-assigned hotel for at least a week or two.

Restaurants, malls and supermarkets are still open, but many parks, movie theaters and even Shanghai’s Disneyland are not. Downtown office buildings are dissuading workers from returning. Schools are shut and students have returned to online learning.

Zhang’s area still required mass testing but only one PCR test in the past two weeks. When a building in his apartment compound, less than 100 yards away from where he lives, was sealed off earlier this month, Zhang was still free to come and go.

Yet, when the same thing happened in my area and a building two doors down from mine was sealed off, there was a very different reaction.

“You cannot leave this compound other than to throw out your garbage,” two men in hazmat suits said.

That was day seven of my lockdown. Outside my window, children played hide-and-go-seek to pass the time. Across the compound, a couple in fuzzy pajamas played badminton. Just before dinner time, someone from my building management knocked on my door.

“The lockdown has been lifted,” a man who identified himself as Mr. Ding said. No outside visitors are allowed and I am required to carry a pass to show upon entry and exit.

Less than a week later, officials announced a wider 8-day lockdown, the east side of the Huangpu river in the first half of the week, then the west side where I live. Only essential services will be allowed to operate including food delivery. The sudden announcement gave people on the east side of the city mere hours to stock up on food. Videos of empty shelves and panic buying circulated on social media.

On Monday, people in the west side, still a few days away from a lockdown came out with bags on wheels and baskets on their bikes in search of fresh vegetables. The lockdowns are supposed to last only four days on each side, but people appear to be hoarding a lot more.