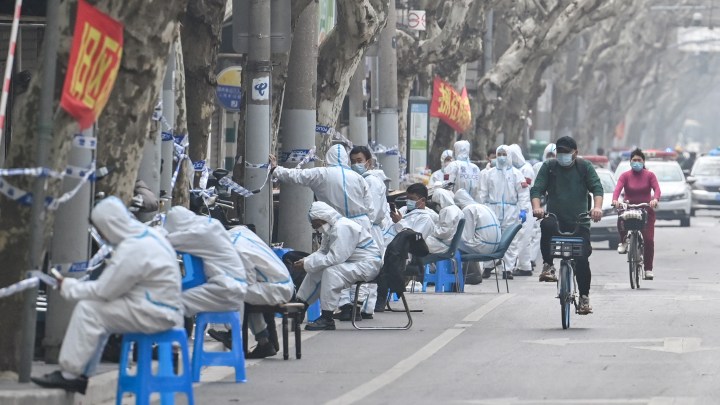 COPY
Some large foreign businesses, seeing COVID restrictions and slowing growth in China, are considering other countries like India for their future manufacturing plans. Hector Retamal/AFP via Getty Images

Some large foreign businesses, seeing COVID restrictions and slowing growth in China, are considering other countries like India for their future manufacturing plans. Hector Retamal/AFP via Getty Images
Listen Now

Apple is speeding up its iPhone production in India, a shift that’s closing the manufacturing gap between China and India for the world’s most valuable company.

The move reflects larger trends among global manufacturers that are increasingly looking toward India and other emerging markets as potential hubs outside of China, the world’s current leader in making things. Ongoing COVID-19 lockdowns and slowing growth in the country mean that businesses are considering other options, said Daniel Rosen, a partner at the Rhodium Group, an independent economic research firm.

“We have some very powerful new factors that are causing companies like Apple to think about diversification,” Rosen said during an interview with “Marketplace Morning Report” host Sabri Ben-Achour. Including “the observation that when push comes to shove, Beijing is ready to really shut its whole economy down for a long time.”

Sabri Ben-Achour: So with regards to Apple spinning up production in India, what is motivating that shift?

Daniel Rosen: I think the first thing to observe is that firms have been diversifying from their China manufacturing bases for a long time, as much as a decade. Partly, that’s just because China was first out of the gate. And so many global firms with manufacturing went to China first. [It] got to the point where they had so much there that it was natural to see some of that activity start to migrate and diversify off to other economies that are also growing very fast and doing well in the region. That’s kind of a long story. More recently, we have some very powerful new factors that are causing companies like Apple to think about diversification. And those include geoeconomic risk, supply chain diversification urgency because of all the regulatory changes taking place around the world. And just the observation that when push comes to shove, Beijing is ready to really shut its whole economy down for a long time and take other measures of their own sovereign choosing, but which are not so great for business. So businesses are thinking about how to position themselves to best deal with that.

Ben-Achour: Right. China’s zero-COVID policy was mentioned as one reason for this particular shift. And, you know, given that companies operate with the long term in mind, does this mean businesses expect China’s cycle of lockdowns and zero COVID to just continue indefinitely, or what?

Rosen: I don’t think anybody expected China to maintain the sort of zero-COVID regimes as we’ve seen them this year for nearly as long as they have. In the first instance, when there’s the risk that millions of people could die, as has happened, sadly, in the United States, you have to applaud a government such as Beijing, willing to take strong measures to try to stamp out a virus. But making something like zero COVID the norm over the course of, it looks like it’ll be probably almost a full year by the time we start to move past it, is not really that effective compared to kind of vaccination strategy. And it’s extremely detrimental to business planning and the ability to make decisions for the medium term, especially in a sector, such as the one that Apple is in, where technology cycles and business partnerships and consumer tastes move so fast that you really need to have a backup plan at all times if you’re laboring under the risk that a government might choose to lock the whole economy down for months and months on end.

Ben-Achour: Among the other reasons for, you know, expanding supply chains beyond China is labor costs, which have been rising in China for some time. So it’s not, as you mentioned, unheard of for low-skilled labor-intensive manufacturing to move to other lower-wage countries. But how notable is it that we’re seeing this in a high-tech manufacturer like Apple?

Rosen: Yeah, there’s some really profound things happening in China that I think are probably not appreciated enough yet. The first is that, as you know, it’s not just folks making socks and underwear moving to Cambodia or Indonesia, we’re talking about high-tech here. And the availability of the most highly skilled people that Apple relies on is also a concern to them. China’s demographics are actually surprising everyone on the low side as well. And many folks are not choosing to start families, keep their careers in China and bet on China in the long run in higher-paid, higher-skilled industries as well. Apple itself is not a giant manufacturer. They are working with lots of contract manufacturing partners in China. And so they have to think not just about what they can control, but what all those other partner companies are going to be able to control as well. So it’s extra-complicated for them. And then, finally, in terms of sort of unanticipated economic forces, until now most firms, including Apple, could bet that while it was tough to operate in a place like China with things like zero-COVID lockdowns, that was going to be the fastest-growing, strongest-growing country in the world economy for maybe a decade or more to come. But over the past year, people have started to call that into question and ask whether what is a really severe downturn in growth in China that’s attributed to COVID might not really just be about COVID. It’s about the property sector. It’s about the willingness of the government to put efficiency and economic interests over ideology and politics, and lots of other things as well. And so some of this readiness to put more of your bets abroad is really a bet on whether China is going to continue to grow as we’ve known it, or maybe India might be the next big thing.

Ben-Achour: Well, of course, you know, it’s not just about concerns in China. It’s also about what India can provide businesses. Can they match, at this time, China’s level of infrastructure and the security that some companies can find in Chinese production?

Rosen: India is no China yet, no question about it. And for a firm like Apple and many others, they’ve built long-term partnerships with Chinese companies using all the benefits and upsides of what it means to manufacture or make stuff in China. That is not going away, and certainly not going away overnight. So what we’re talking about here is some marginal change in the balance between continuing to put most of your eggs in the Chinese basket versus accelerating your plans to put more of those eggs elsewhere. And India is exciting, of course, both because it has such a large population — pretty high-skilled, some of the most high-tech information communication technology professionals in the world come out of the Indian educational system, so that’s very attractive. And then in the long run, if India can keep its act together, it really will outgrow China. Its consumer markets, while not nearly as big as China’s today, will turn in more growth in the years ahead. So India’s got a lot of potential. And finally, I would say, there’s a little bit less likelihood that New Delhi tips the scales as much in favor of its national champions and home team players as China seems to be doing with its leading companies in the People’s Republic.