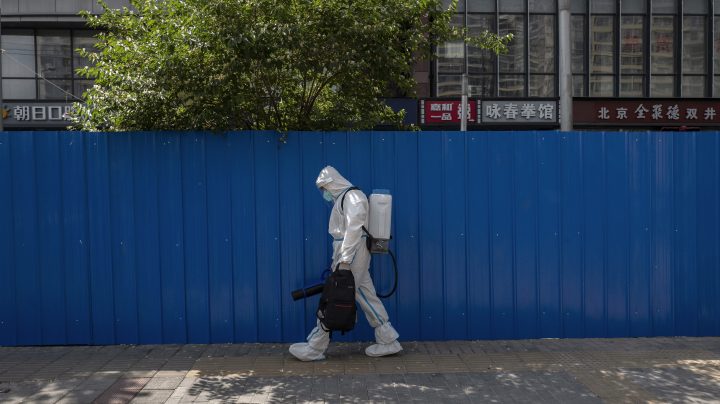 In the early days of the pandemic, China’s zero-COVID policy served the country pretty well. But in the era of omicron, it’s causing quite a bit of strain.

The strict lockdowns in places like Shanghai, as Marketplace correspondent Jennifer Pak has shown, are affecting employment in China and spilling over into global supply chains.

Patrick Tachasirodom’s company makes packaging for cosmetics in Southeast Asia. He is based in Bangkok, but the manufacturing takes place elsewhere. “Our factory mainly produces from China,” he said.

As one region in China after another has entered lockdown, Tachasirodom has had to juggle production among factories he can find that are still up and running. Even when he does get products made, getting them out of China is an ordeal.

“If you send by land, you might stop at the border. It’s about two weeks, three weeks,” Tachasirodom said. That’s three weeks stuck at the border with no idea when supplies will get through. “You cannot tell the customer when their products will arrive,” he said.

Now multiply this story by all the companies that produce or need things in affected areas of China, and you get a web of consequences that circles the globe.

Andy Rothman is an investment strategist at Matthews Asia. “Everything in China is a mess right now in terms of China’s connection to global supply chains,” he said.

Nearly 60% of U.S. firms in China have lowered their income forecasts for the year, according to the American Chamber of Commerce in China. More than half postponed or reduced investment, according to Ali Wyne, a senior analyst with Eurasia Group.

“The global economy is still dealing with scar tissue from the pandemic. It’s now being further strained by the Russian invasion of Ukraine, it’s dealing with sustained inflationary pressure, so this new round of lockdowns exacerbates those existing pressures,” Wyne said.

Meanwhile, Americans’ spending habits have made the U.S. particularly vulnerable to the Chinese lockdowns.

Yasheng Huang is professor of global economics and management at the Massachusetts Institute of Technology’s Sloan School.

It’s not clear how long these lockdowns and supply chain problems will last. President Xi Jinping said Monday that China’s commitment to its zero-COVID policy will be unswerving.