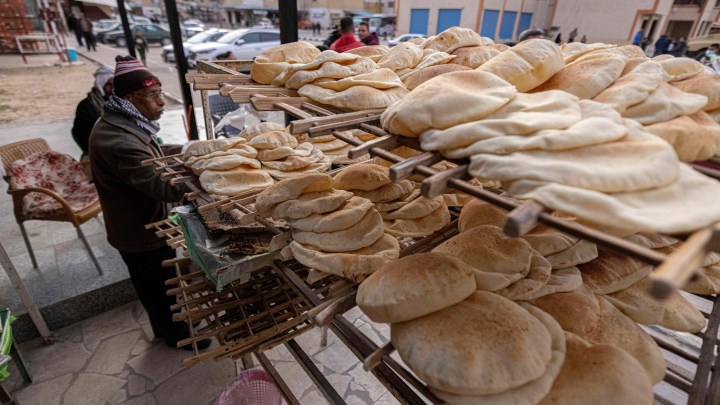 COPY
In Egypt, the government subsidized bread so much that it costs consumers less than the value of the grain it's made with, leading to waste. Khaled Desouki/AFP via Getty Images

In Egypt, the government subsidized bread so much that it costs consumers less than the value of the grain it's made with, leading to waste. Khaled Desouki/AFP via Getty Images
Listen Now

The United Nations announced Friday that its index of global food prices increased 12.6% in March from the month before, the highest it’s been since the U.N. started tracking prices more than three decades ago.

Those price increases are being felt more keenly in developing countries, where many people spend a greater portion of their income on food.

That’s the case in Ethiopia. So, when prices go up, Ethiopians get hungrier, said Eric Muňoz, senior policy adviser for agriculture at Oxfam America.

Muňoz, who has worked in the Horn of Africa, said the international community should provide more targeted help to the region.

“The response to the suffering in Ukraine is highly commendable, but it shouldn’t come at the expense of meeting needs in other countries as well.”

There are certain things those governments can do to soften the blow for their citizens, but in a global economy, it’s sometimes better to think globally.

When dealing with high food prices, there are some things countries should and should not do. “What should not be done is arguably the most important thing,” said the U.N.’s Josef Schmidhuber.

Countries should not drastically subsidize food prices, he said. In Egypt, for example, the government subsidized bread so much that it now costs less than the grain that goes into it.

“That inevitably leads to a lot of waste, and even to developments where consumers are feeding bread to poultry because it’s cheaper than wheat,” Schmidhuber said.

Another thing countries shouldn’t do? Place export bans on products that are in high demand, like wheat and sunflower oil — two major exports from Ukraine.

Countries might be tempted to keep all that food for domestic use, but that has consequences, according to Joseph Glauber, senior research fellow with the International Food Policy Research Institute.

Glauber said importing countries should be flexible and willing to seek out alternative suppliers.

Farmers should respond to the high prices by planting more crops, Glauber added. But that’s a solution that will take months — so food prices will likely stay high until at least 2023.

The U.N. is also proposing a system that would reduce import costs for developing countries.

“Countries that are dependent on food inputs and don’t have the money to buy should get access to credit so that they are able to do so,” Schmidhuber said.

Credit might also be provided to make it cheaper to import fertilizer and other materials that would help them grow food locally, he added.

Update (April 11, 2022): This article has been updated to include additional information heard on “Marketplace Morning Report.”