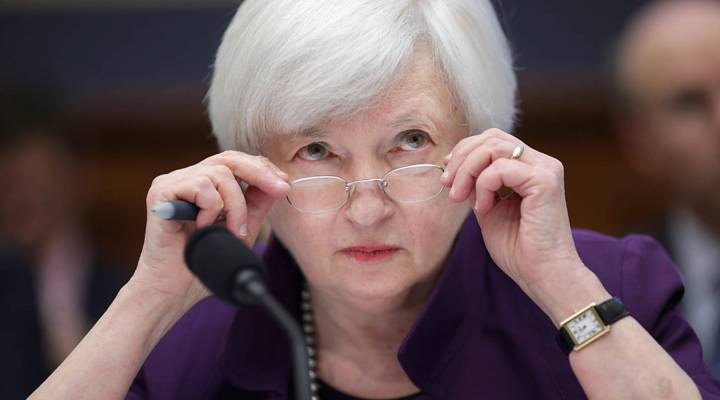 COPY
U.S. Treasury Secretary Janet Yellen took account of a variety of economic issues during her talk in Germany ahead of G7. Chip Somodevilla/Getty Images

U.S. Treasury Secretary Janet Yellen took account of a variety of economic issues during her talk in Germany ahead of G7. Chip Somodevilla/Getty Images
Listen Now

U.S. Treasury Secretary Janet Yellen has warned of mounting economic troubles — in particular, soaring global food and energy prices, and slowing growth — from Russia’s war in Ukraine and resulting supply-chain disruptions. She spoke yesterday in Bonn, Germany, ahead of the G-7 meeting this weekend.

The U.S. Treasury Department meanwhile has announced new initiatives and billions in aid — in coordination with other governments and international development banks — to try and prevent food shortages, food insecurity and hunger from spreading in the poorest nations.

Global food prices are up 30% in the last year, according to the U.N. That’s a disaster for poor countries – they depend on food purchased on the global market to feed their people.

“Many of these countries are facing a double-whammy, because food prices are rising, and in terms of their own currencies, they’re rising even more,” said Prasad. So they can’t afford to buy as much food as they used to.

Wagner sees one sign of hope in the small decline in global food prices in April. And Prasad says the international community’s focus on the problem might not help right away, but it can’t hurt.