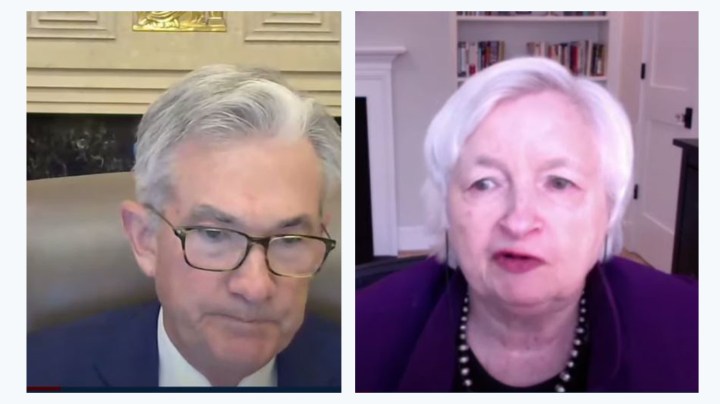 Federal Reserve Chair Jerome Powell told lawmakers Tuesday that the Fed expects inflation to rise this year, but it will not be “particularly large nor persistent.”

The comments came during a House committee hearing about the Coronavirus Aid, Relief, and Economic Security Act. While the hearing was meant to be about last year’s legislation, the focus was on the $1.9 trillion American Rescue Plan President Joe Biden signed into law this month.

Republican lawmakers were particularly concerned the plan would lead to undesired inflation. Powell said there could be some upward pressure on prices as the pandemic is controlled, vaccine distribution continues and the economy continues to open up.

“Our best view is that the effect on inflation will be neither particularly large nor persistent,” he said. “And part of that just is that we’ve been living in a world of strong disinflationary pressures — around the world really — for a quarter of a century. We don’t think that a one time surge in spending leading to temporary price increases would disrupt that.”

“However, we have the tools to deal with that,” Powell said.

Treasury Secretary Janet Yellen also testified in what was her first appearance on Capitol Hill since being sworn in. In her prepared remarks, Yellen predicted that the U.S. could return to full employment as soon as next year. The Treasury secretary also focused on hard-hit small businesses.

“Since taking office two months ago, we have been expediting relief to the areas of greatest need,” Yellen said. “For example, small businesses — and especially the smallest small businesses, which are disproportionally owned by women and people of color.”

Several lawmakers asked Yellen when they could expect guidance from the Treasury on the American Rescue Plan and a timeline on when the money will be distributed to state and local governments.

“We have to issue guidance quite quickly — I think within 60 days — and distribute the funds,” she said. “We’re working very hard to sort through the issues that we need to in order to provide clarity about the purpose of the funds and how they can be used.”

The hearing was also used by several lawmakers to address how the Fed and Treasury are assessing the risk posed by climate change. The Federal Reserve formally joined the Network of Central Banks and Supervisors for Greening the Financial System, or NGFS, in December.

Powell said the Fed sees climate change through the lens of the Fed’s existing mandates, including ensuring the institutions the Fed oversees understand and manage their risks. And, he said, climate change is an emerging risk. The Fed is in the early stages of considering stress scenarios for climate change, he said.

“But we’re doing that and many other things to get a basic understanding of how the financial system can be resilient against what may be very significant emerging risks over time,” Powell said.

“Climate change poses very severe risks to the well-being of humanity, and it’s a global problem that demands a global solution,” Yellen said. In addition to rejoining the Paris Climate Agreement, the Biden administration intends to put forward a proposal to invest in sustainable infrastructure and create new green jobs, she said.

Tuesday’s hearing was the first of two days of Congressional testimony. Both Powell and Yellen will testify Wednesday before the Senate Banking Committee on the CARES Act.