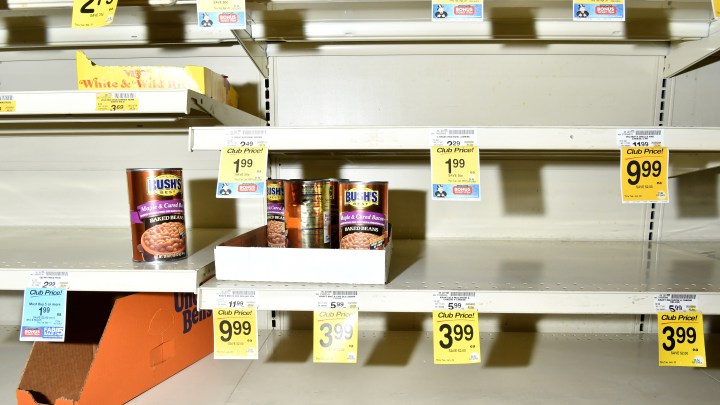 COPY
Mostly empty supermarket shelves at the beginning of the coronavirus pandemic. Food prices have climbed as the U.S. economy struggles to recover from the recession. Amy Sussman/Getty Images

Mostly empty supermarket shelves at the beginning of the coronavirus pandemic. Food prices have climbed as the U.S. economy struggles to recover from the recession. Amy Sussman/Getty Images
Listen Now

We got new numbers on the rising price of food Thursday. A United Nations index showed that prices hit a three-year high in 2020 — with gains in everything from meat and dairy to grains and oils. That’s not great for an economy that’s trying to recover.

One of the many foods that’s getting more expensive is vegetable oil.

“Vegetable oil prices year to year went up 19%. That’s quite a bit,” said Abdolreza Abbassian, a senior economist at the U.N.

A big reason, he said, is that China’s economy is recovering. The country’s been buying a lot more palm oil, which is used in all kinds of household products, including ice cream, detergent and even lipstick.

“So the combination of that has contributed to also higher prices,” Abbassian said.

Meanwhile, severe summer storms destroyed crops from Iowa to Indiana. And other parts of this country are in the middle of a drought.

“If the weather doesn’t turn around and if this drought isn’t alleviated, then we’ve got an issue,” said Naomi Blohm, senior market adviser at Total Farm Marketing.

“So when the costs go up, there’s just no buffer to protect the consumer,” he said. “And it gets passed on quite quickly.”

That’s unwelcome news during a recession.

Rogoff said price hikes will be hard for consumers to avoid.

“They seem to be traveling less, buying less clothes,” he said. But food is not an area where people have been cutting back.