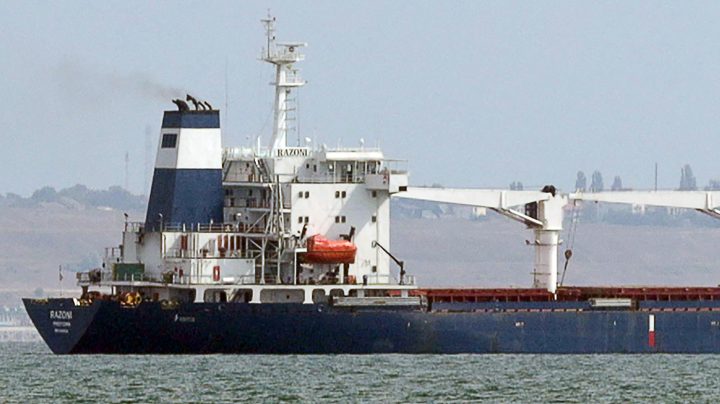 A ship full of corn is on the move. About 26,000 tons of the grain left Ukraine’s largest port Monday, bound for Lebanon. Ukraine is an important producer of grain for world markets, and this is the first load it’s been able to export since the Russian invasion in late February.

The war and Russian blockades have reduced global grain supplies, causing worry about food shortages, and higher commodity prices are another consequence.

In the U.S., the cost of food at home — basically, groceries — has jumped by more than 12% over the past year.

There are many reasons for that. A couple of years ago, there was a swine fever outbreak in China, so a lot of pigs died and pork prices went up. As the pig population recovered, it affected costs of other food items.

“All of those pigs need to eat,” said Chris Barrett, an economist at Cornell. “And that increased demand for corn and soy and other things.” So those became more expensive.

Climate change is also playing a role, according to David Ortega, a food economist at Michigan State.

“We’ve seen droughts in parts of the U.S., you know, the heat wave that set records in Europe, but also in other important agricultural-producing regions — South America and Canada,” he said. “And so that’s led to less product being available, which adds upward pressure on prices.”

Also there’s the war in Ukraine, which has made grain more expensive, and other things go into the price of food as well. Fuel costs and labor costs, for example, have been rising too.

Now, the food inflation numbers in the U.S. are pretty bad, but Barrett at Cornell said they could be worse.

“In some places, it’s much worse because they have much longer, more expensive supply chains. They’re more vulnerable to the oil price shocks that have really run up transport costs a lot,” he said.

Especially, he said, in landlocked parts of Africa and Asia.

Globally, food prices are up 23% over the past year. The good news is, that’s not as bad as things were in May. Prices at the grocery store are starting to come down a little, especially grains and vegetable oils.