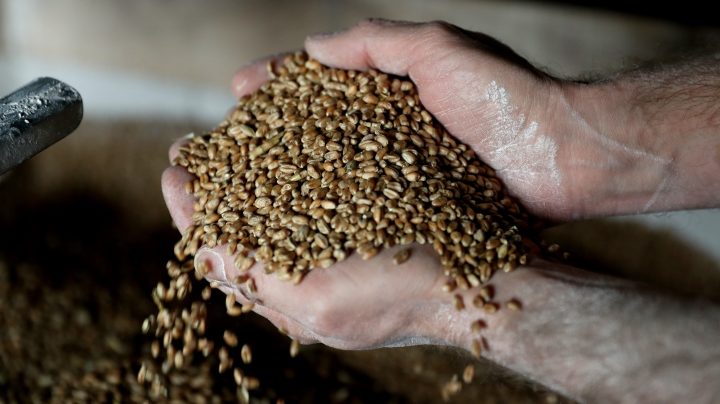 COPY
With so much uncertainty, the “risk premium” on U.S. food is going up, according to Eric Wilkey, president of Arizona Grain Inc. David Rogers/Getty Images

With so much uncertainty, the “risk premium” on U.S. food is going up, according to Eric Wilkey, president of Arizona Grain Inc. David Rogers/Getty Images
Listen Now

The war in Ukraine has already shocked the global food system, pushing prices for wheat, corn and other oil commodities higher. The international grains and oilseeds index — yes, that’s a thing —  has jumped 17% since the beginning of February.

As a major supplier of both corn and wheat, Ukraine’s ability to export crops is an important factor in global food markets, but so are other variables, including the price of fuel and interest rate policy.

“Marketplace” host Kai Ryssdal spoke with Eric Wilkey, president of Arizona Grain Inc., a grain wholesaler based in Casa Grande, Arizona, about how price-setting works in global grain markets. The following is an edited transcript of their conversation.

Kai Ryssdal: So thumbnail sketch the last three and a half-ish weeks in the grain business. What’s it been like?

Eric Wilkey: Well, it’s a word that’s pretty popular right now, and that’s “volatility” and “uncertainty.” Margins typically have to cover that uncertainty, and it makes it difficult for price discovery.

Ryssdal: So explain to the layperson out here, of which I include myself, “price discovery” in grain means what? I call you up and I say I need 1,000 bushels, and you say that’s gonna cost you this many dollars. Is that price discovery?

Wilkey: I mean, in very simple terms, the market or where price discovery happens is when a buyer and a seller agree on a price. And when there’s volatility, that’s, that’s sometimes hard, because there’s uncertainty on both party sides.

Ryssdal: Where does price discovery happen? Is there like an actual marketplace?

Wilkey: Yeah, I would say in the green industries, it’s concentrated mostly around the CME — the Chicago Mercantile Exchange futures markets. That is a proxy for price pretty much anywhere in the world for corn, soybeans and wheat, as examples. We all know our relationship on a normalized basis relative to that Chicago futures quote, but when there’s this volatility, it becomes a little murky as to what your relationship is to Chicago. In other words, what is the freight rates from that market to this market where I operate? What’s the price of petroleum? What’s the interest rates? All those things moving so quickly create the difficulty to find a market price at any particular location.

Ryssdal: Boy, there was a lot in that answer, right? Because you had freight, which is fuel and oil, which is globally traded and a big problem right now. But what if I’m a dairy farmer, right? And I’ve got however many head of cattle and I need grain, and I call you and I say, “Eric, I want to buy my whole load right now, at today’s price, for the rest of the year.” Can you do that for me?

Wilkey: In a normal market, that is not difficult at all. The futures markets, that reference point, is quoted all the way out as far as typically two years. But when you have this uncertainty, you need to start to say, “OK, I have to project what transportation costs are, what supply and demand are for multiple years.” The way you deal with that is you have to widen the margin or widen the risk premium if you’re going to provide them a certain price that they can lock in. It’s difficult, because everybody needs to price that risk of change into their quotes.

Ryssdal: You know, it’s funny, we’ve talked on the program a couple of times since the war started about the cost of risk, the price of risk, and here it is sort of rubber meeting the road in the grain business.

Wilkey: It certainly is. I think the biggest change probably in the world’s supply and demand — and that’s what ultimately sets prices — is that Ukraine is a major exporter of corn, major exporter of wheat. Therefore, who is going to supply that grain if it’s not available in the expected time frame? I would say today’s activity — we’ve seen the markets move down dramatically, we’ve seen crude come down —  seems to be that there’s at least a feeling in the markets that the conflict may moderate. [There are] certainly no guarantees, but that’s what the market tends to signal today.

Ryssdal: Let me break the fourth wall just a little bit. Before we actually turned on the tape decks, I asked you where you were and you said you were in Charleston, South Carolina, for a meeting of the National Grain and Feed Association, of which you used to be the chair. What’s the scuttlebutt of the short to medium future of your line of work?

Wilkey: Well, I think we’re all trying to get our head around, will those shipments of grain — you know, again, Ukraine is the margin that we need to keep markets rational and functioning. I think we all played scenario games in our conversations, “What if? What if? What if?” And then, of course, the bigger question is: What do we do next year if this is a longer-term drawn-out [conflict]? And that’s a bigger problem.