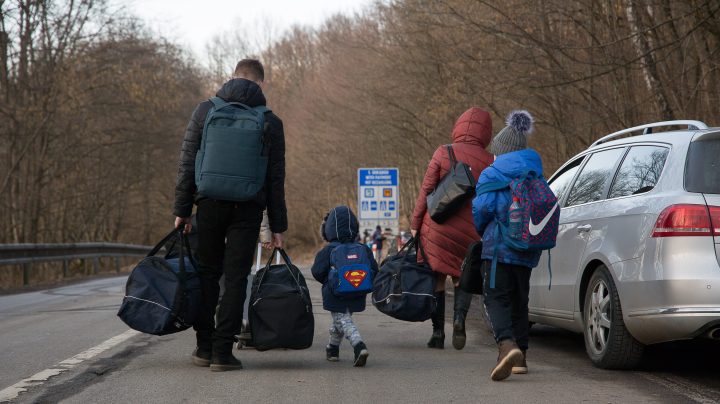 COPY
People carrying bags walk on a street in Ubla, Slovakia, after crossing the Slovak-Ukrainian border on Feb. 24. Russia began a large-scale attack on Ukraine overnight, with explosions reported in several cities and outside the regions held by Russian-backed rebels. Zuzana Gogova/Getty Images

People carrying bags walk on a street in Ubla, Slovakia, after crossing the Slovak-Ukrainian border on Feb. 24. Russia began a large-scale attack on Ukraine overnight, with explosions reported in several cities and outside the regions held by Russian-backed rebels. Zuzana Gogova/Getty Images
Listen Now

The Russian invasion of Ukraine is already dealing a blow to financial markets and the worldwide economy. Global supply chains and growth had been broadly recovering from the pandemic, but now all that’s in doubt, given the stricter sanctions and other punitive measures against Russia that are in the offing.

The war has introduced a lot of unknowns for global trade, financial markets, multinational corporations and national economies, including the U.S. economy.

This new war at the eastern edge of Europe cuts into food and energy supplies, which means higher prices, and generates risk, which is expensive.

For weeks, there have been warnings of a Russian invasion. But with bombs falling and tanks moving into Ukraine, “the mood is, I think, one of shock, disbelief,” said Jacob Kirkegaard, senior fellow at the Peterson Institute for International Economics.

“This is the end of the pandemic and the beginning of the era of geopolitical risk at an entirely new level. And I think many of the supply chain issues that are still with us from the pandemic, they’re going to be aggravated by this,” Kirkegaard said.

That means global energy costs will rise, and so will food costs.

“Both Russia and also Ukraine are among the world’s largest grain exporters. So I think we’re going to see major disruptions of the world’s food supply — more important than, say, that you and I have to wait an extra week to get our flat-screen TV, right?” he said.

Additional sanctions against Russian banks and companies will mess with global trade and financial relationships, according to Cari Stinebower at international law firm Winston & Strawn.

“We are seeing disruptions already in the maritime sector, in shipping lanes coming out of the Black Sea. And then dealings in sovereign debt, the ripple effect will be throughout the financial sector. It could impact private equity, but also mutual funds,” Stinebower said.

U.S. financial markets have already faltered since the beginning of the year in the face of rising inflation and global tensions.

“From peak to trough, the market is off 12%,” said Sam Stovall, chief investment strategist at CFRA Research. “Many of the groups that had been doing very, very well, like semiconductors, homebuilding, are in their own bear markets.”

To gauge market risk going forward, Stovall looks to an index called the VIX that tracks volatility. It’s running high right now, which means “the market expects volatility in the short term to be picking up. And what volatility means simply is that there’s greater anxiety for investors,” he said.

Stovall said there’s one potential positive economic effect of what’s going on now. Central banks might not raise interest rates as aggressively to fight inflation since that could slow the global economy right when a new European war is making the future murky and dangerous.