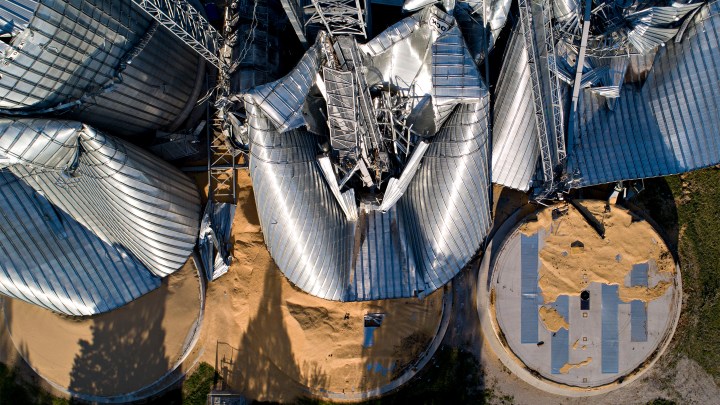 Iowans are still recovering from a series of storms that ripped through the Midwest more than two weeks ago. The storms tore up millions of acres of corn and soybean fields, adding to the long list of crises American farmers have faced in the past few years. Marketplace host Kai Ryssdal talked with April Hemmes, a corn and soybean farmer in Franklin County, Iowa, to see how things are going. The following is an edited transcript of their conversation.

Kai Ryssdal: April, it’s Kai. How are you?

April Hemmes: I’ve been better, but not too bad. Getting ready to go to my niece’s wedding.

Ryssdal: All right, we’ll get there in a minute. Tell me why you’ve been better, though. It’s been a couple of weeks since these storms. Did they hit you?

Hemmes: Oh, no. They were, fortunately for me, about 40 miles south of me. But imagine what is happening to Louisiana and Texas now [the impact of Hurricane Laura] happened in Iowa, only across the land. It was at times 140-mile-per-hour winds. And I try to relate it, so if you’re on the East Coast, it’s from New York to D.C., 70 miles wide, and it flattened all of our crops, tore up a lot of grain bins where we store our crops. It was devastating. Thirty percent of the corn — they just came out today with new numbers — 30% of the corn crop is gone and 30% of the soybeans. And Iowa’s usually No. 1 in raising corn and No. 2, I like to say No. 1, in soybeans. But remember, Illinois is No. 2, and it went across Illinois too. And that’s not enough, Kai. But wait, there’s more. I just thought that our drought monitor, and every single county in the state of Iowa is in a drought now. So that’s how much fun it is farming in Iowa right now.

Ryssdal: Yeah, I bet. So look, the drought’s obviously gonna hit you. But farming I’m sure in Iowa is reasonably close-knit. You know a lot of those people 40 miles south whose crops are all wiped out. What are they gonna do? What are they telling you?

Hemmes: Well, we do have crop insurance. Most of us, almost all. The banker makes us. But like I tell people, you don’t buy crop insurance hoping…. it’s just like car insurance or house insurance. You don’t want a fire or an accident. We buy it just to cover our expenses to pay the bank back. So a lot of them are waiting for the crop adjusters to come out and tell them, you know, they’re going to zero it out or they have to try to pick it, which — you drove my combine.

Hemmes: Imagine going one way at a mile an hour and you were going 3½. You kind of pushed it a couple of times, you have the need for speed. So imagine doing that all day long, going one way, dump, turn around, go back. So that’s what they’re looking at right now. I mean, it’s like they lost their job and their house all in one day.

Ryssdal: Right. And then you pile that on top of the pandemic and oh, by the way, the China trade stuff, which is still going on, I’m sure, in terms of you guys not being able to sell your stuff. And it’s like a triple whammy.

Hemmes: It is, yeah. You know, we’re hearing there’s no way China’s gonna reach that goal. So yeah, the world is going to South America till they run out, and then they’ll come to us for soybeans and corn.

Ryssdal: Last time you and I talked, you’d just put your crop in the ground. I mean, drought aside and all the terrible stuff that’s happening, how’s it gonna go for you come harvest time?

Hemmes: Oh yes, I’ve had two inches of rain since July 1. So normally, I would have five times more than that. Corn will be OK. But the soybeans are really going to be hurting. We’re going to take a yield hit this year, no doubt.

Ryssdal: OK, let’s go out on a high note. The good news: your niece’s getting married, you’re going on a road trip, right?

Hemmes: I am! My husband came home from work about three weeks ago and said, “Get me out of here! I need a vacation.” So we toured the Black Hills. We went through South Dakota, that’s where he was born. It was gorgeous, and it was good. And the crops look really good there for those farmers. So yeah, we’re headed out to Minnesota today. And a positive note, our daughter’s flying in from Seattle, so we get to see her. We haven’t seen her since January. So I’m looking forward to it.