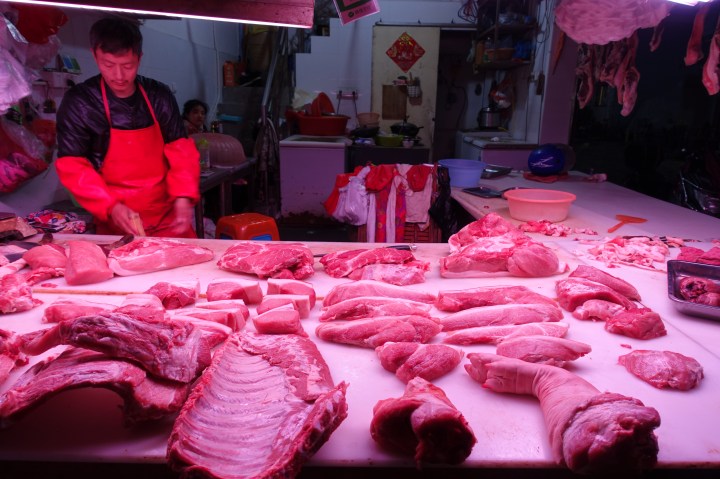 COPY
A local meat market in Shanghai is dominated by pork stands. Pork is a staple in the Chinese diet and accounts for 70% of all meat consumed in China. Charles Zhang/Marketplace

A local meat market in Shanghai is dominated by pork stands. Pork is a staple in the Chinese diet and accounts for 70% of all meat consumed in China. Charles Zhang/Marketplace
Listen Now

China’s pork prices increased more than 14% in April as the African swine fever epidemic ravaged pig herds. There’s worry in Beijing that rising pork prices could trigger a ripple effect throughout the economy.

“About 690 million pigs were slaughtered in 2018, but the data we’re getting from different channels shows that the number of pigs available for slaughter [this year] has decreased by 20%, and this drop is accelerating,” said analyst Zheng Lili with Chungyi Information Consultancy, which specializes in China’s pork industry.

Officials from China’s Ministry of Agriculture and Rural Affairs last month cited experts who estimate that wholesale pork prices will increase 70% in the second half of 2019 compared to the previous year.

The disease is not harmful to humans, but it is deadly for pigs.

Pork is a staple in the Chinese diet. Its price increase is one of the key reasons the consumer price index (CPI) was up 2.5% in April compared to a year earlier.

China’s government is keen on intervening to stabilize prices, including by increasing contributions to its “strategic pork reserve.”

Why is pork so important to China’s economy?

Pigs are crucial to Chinese cuisine, culture and its economy. Menus in mainland China list pork simply as “meat.”

Pork features prominently during wedding banquets, lunar new year and other celebrations. The country’s pork consumption is greater than all the meat Americans consume annually.

However, the meat was not always plentiful. Some people over the age of 60 told Marketplace that they were lucky if they could have pork once a week.

Now that the country is wealthier, pork accounts for 70% of all meat consumed in China, according to Zheng, the analyst. Chicken is a distant second at 15%, with pricier beef and mutton accounting for only 10%, she said. If pork prices keep climbing, it is bad for consumers and the economy.

“Before 2014, the price of pork accounted for 3% of the CPI. That was later revised to 2.7%.  That’s a high ratio. So, fluctuations in pork prices can affect the stability of the macro economy,” said Zhu Zengyong with the Agricultural Information Institute at the state-backed Chinese Academy of Agricultural Sciences.

Some 40% of pigs come from backyard farms, according to Zheng.

How does China’s pork reserve work?

“When the government finds that the number of pigs has dropped to a certain level, 20%, for example, it will store some pork to ensure everyone has pork to eat in the future,” Zheng said.

Once the government sets a target of how much frozen pork to store, it invites big slaughterhouses to make bids.

“The winners will get government subsidies to buy pork from the market to store in their own freezers,” Zheng said. She said the reserve can store up to 200,000 metric tons (220,000 tons).

How effective is the national pork reserve?

The system has its limits. Pork can only be kept frozen for so long, and while the government has its own freezers, it mainly depends on a network of slaughterhouses to store the meat.

Plus, the government doesn’t always make it profitable for slaughterhouses to store the pork.

In March, China announced a target of storing 24,000 tons of pork because of the African swine fever outbreak.

“As far as we’ve heard, the government’s call to fill up the pork reserve failed because the offer price was too low,” Zhu with the Chinese Academy of Agricultural Sciences said.

Slaughterhouses didn’t have enough incentive to fill up the reserve. Zhu said the mere act of talking about storing pork is a signal to the market that officials will not let prices spiral.

“The pork reserve can guide the market,” he said.

What else can China do to stabilize pork prices?

Raising imports could help. China imports most of its pork from Europe, Canada and Brazil. U.S. pork producers also anticipated selling more to China because of the African swine fever outbreak.

However, since China slapped tariffs on American pork, some data from the U.S. Department of Agriculture suggest that exports to China have been falling.