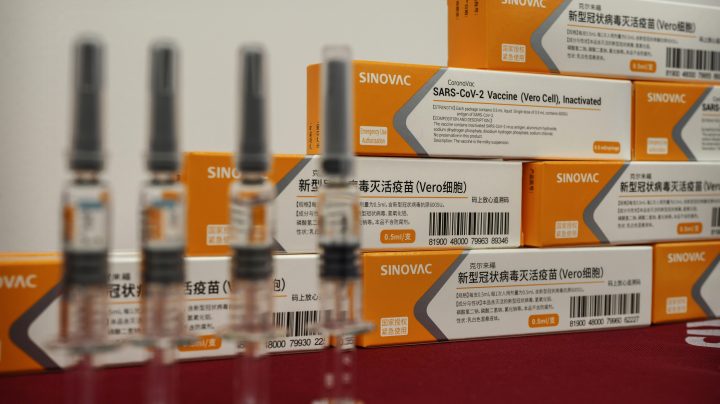 Indonesia has Southeast Asia’s largest number of confirmed COVID-19 cases. More than 629,000 people have tested positive, while 19,000 have died since the pandemic began.

Now, the country is waiting for its food and drug agency to give regulatory approval for emergency use of China’s Sinovac Biotech vaccine, the first shipment of which it received in early December.

Once it’s given the go-ahead, front-line workers, police and military will be first in line. Indonesia will then begin vaccinating those between the ages of 18 and 59, before prioritizing older members of the population as other countries have done. The idea, officials say, is to solve the problem of asymptomatic transmission among working-age members of society.

Prioritizing the population is one hurdle, but other difficulties remain: The country is made up of thousands of islands, and ensuring other vaccines — like Pfizer and BioNTech’s — stay at ultra-cold temperatures is a challenge for a country with a warm climate.

Indonesia is also home to the world’s largest Muslim population. The Islamic religion has restrictions on pork consumption, which has raised questions about the ability for those who practice to receive some versions of the coronavirus vaccine. That’s because some use a common stabilizer, which makes it easier to transport and store, made from a pork-based gelatin.

On the global edition of the “Marketplace Morning Report,” Dr. Pandu Riono, a professor of epidemiology at the University of Indonesia, spoke with the BBC’s Victoria Craig about how the country is working through the challenges to help it weather the pandemic.

Dr. Pandu Riono: We focus on the younger people because the government is trying to push those younger people to go to work without being afraid of being infected. Also, most younger people are the hidden spreaders in our country. So, if they got immunized, then they can protect other groups.

Victoria Craig: So, the goal is to reach a sort of herd immunity quickly. But actually distributing this vaccine across thousands of islands in Indonesia is a unique challenge on its own. What are some of the challenges that the government faces in just transporting the vaccine?

Riono: That’s the biggest challenge to distributing the vaccine, especially if a vaccine needs colder temperatures, like Modena or Pfizer. It means that the government will focus on the big, big cities and Java and Bali. That’s because that’s where the most people in the country live, and we realized that this pandemic is urbanized.

Craig: So how long do you think it could take to get everyone in Indonesia vaccinated?

Riono: We don’t need everyone. If we got 90% vaccinated, we will have some impact. The government said they will target it so that in one year half of the people in this country to be vaccinated, and that’s why they targeted 50 million every month.

Craig: So the government wants to make this vaccine free for all, but what about trust in the vaccine itself? The Indonesian president has said he’ll be the first to get vaccinated. Has that boosted confidence in it?

Riono: Yeah, because you know, one survey said 56% of respondents agreed to get vaccinated and around 20% still consider. Another percent will be thinking about it.

Craig: So that’s about 76% of the population either planning to be vaccinated or considering it, but it’s not just about trust in the vaccine development process, but that the end product also meets religious needs too. And Indonesia is home to the world’s largest Muslim population. So, is the manufacturing process a concern in the country since one of the common stabilizers that’s used in the vaccine is made from pork?

Riono: It’s true. That’s why the Islamic religious leader, because this is emergency situation, says it’s still OK, even if [the vaccine] uses pork. The Islamic religious leader already supports this idea to be vaccinated because he says the pandemic is worse than the benefit of the vaccines. They considered a vaccine from China, which is made from pork — that’s why the Islamic leader sent a team to check the process and how they make the vaccine in China.

Craig: And not all the vaccines use this stabilizer, do they?