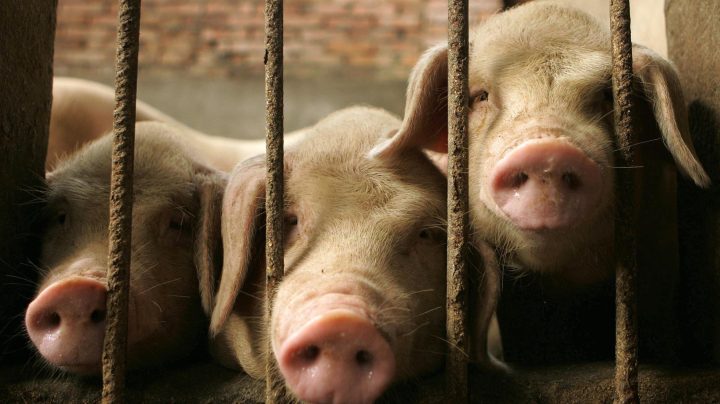 Easing pandemic restrictions in many cities this year is spurring a surge in pork demand as restaurants look to fill their coolers with goods such as ribs and ham for returning customers.

“It’s a pretty tumultuous time,” said Brian Duncan, vice president of the Illinois Farm Bureau and a corn, soybean and hog farmer. “We’re trying to hang on to some profits.”

He spoke to “Marketplace” host Kai Ryssdal about the challenges affecting hog farmers. The following is a transcript of their conversation.

Kai Ryssdal: So listen, let me just jump right in here. The reason we called you was because of a headline we saw in the Wall Street Journal the other day that goes like this: “U.S. Hog Prices Sink as China Rebuilds Herd.” And I said to myself, “We’ve got to talk to Brian Duncan.”

Brian Duncan: Well, I guess I’m your go-to on this issue.

Ryssdal: You are the hog guy. So, I mean, look, there’s a lot to talk about. But first of all, the prices you’re getting [at] market for your hogs? How are you doing businesswise?

Duncan: Prices are pretty good right now, actually. We’ve had a really good combination of factors and good domestic demand, along with exports, like you just referred to. You know, there’s quite a bit of uncertainty, though, you know. China is always a wild card. And then the next question is, do you believe anything they’re saying about the rebuilding of their hog industry, and then we’ve also got this whole issue with line speeds and a judge’s ruling in Minnesota that’s going to slow us up. So it’s a pretty tumultuous time. We’re trying to hang on to some profits.

Ryssdal: Is that — the line speed thing — is literally how fast they process the hogs? Just give me the 30,000-foot view here. Is that what’s going on?

Duncan: Sure, there’s a new inspection system that went in place for moving hogs through the harvest facility, which is good for producers like me, good demand. But a judge has looked at that system and said they didn’t take into account all the factors that should have been. Anyhow, now it’s a political football, Kai.

Ryssdal: Yeah, I bet. Let me ask you a couple of sort of ancillary questions. Number one is weather. I understand you guys have been having a drought up there, and farming’s tough in the best of times, and I can’t imagine doing it during a drought.

Duncan: Yeah, I’m in the northern part of Illinois, and we are very dry. We had some good rain Father’s Day weekend, but that’s about it. If the hot temperatures would stay abated, you know — we sure don’t want that dome they’ve had out in the Pacific Northwest to come over the Midwest, I’ll tell you that.

Ryssdal: Yeah. OK, so item No. 2 is sort of domestic demand. As people get back, are you seeing demand for ribs and, you know, all that good stuff that comes out of your hogs?

Duncan: Yeah, we are, and food service has come back online. And all of a sudden they start stocking up, right? And ballparks, I mean, full capacity at Wrigley Field. You know, that’s a lot of hot dogs they need all of a sudden. So as we see things come back online, pork is positioned pretty competitively priced in the meat case, and we all know, Kai, bacon’s a bargain at twice the price. So, demand is good.

Ryssdal: All right. But wait a minute. Are you a Cubs fan?

Duncan: Yes, I am. But boy, after those last six games, I’m not so sure I’ll claim them, but afraid I am.

Ryssdal: Yeah, it’s a little tough for Cubs fans right now. OK, last thing, and then I’ll let you go and let you get back to work, Mr. Duncan. How long do you think — and I’m pretty sure I’ve asked you a variety of this question at least every time over the past, you know, year and a half or whatever — how long are you figuring till you can look and say, “You know what, the pandemic is done, and my operations on my farm are back to normal”?

Duncan: That’s a great question. I thought it was going to be pretty soon here. You know, you’re always a little nervous, and you don’t want to take things for granted. But I think once we get over this demand surge now of restocking, I’d hope by the end of summer things will have settled into what is a sustainably profitable time period for all of agriculture, not just the hog industry.