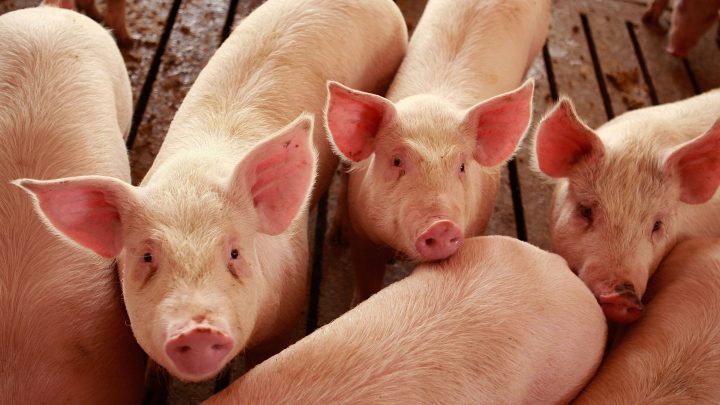 After a turbulent year for American farmers, the trade war has gotten worse.

American farmers were stunned this week when China’s Commerce Ministry halted all imports of American agricultural products. This comes after nearly two years of back and forth tariffs between the two countries and months after extreme weather devastated many U.S. farmlands.

Brian Duncan raises hogs and grows crops on his farm in Polo, Illinois, and serves as vice president of the Illinois Farm Bureau. He said this moment is particularly troubling for American hog farmers, since China is currently facing an outbreak of swine fever.

Duncan spoke to “Marketplace” host Kai Ryssdal about China’s latest retaliatory effort and how farmers are losing hope over the trade dispute. The following is an edited transcript of their conversation.

Kai Ryssdal: I want to do a very quick drive-by on the trade situation just ’cause you’re kind of one of our go-tos on that. It seems you have pegged up a notch here. The president’s talking about how good he’s being to farmers, but in the meantime, there’s a currency war now. What do you make of it?

Brian Duncan: Yeah, I mean you brought up a couple issues. We’ve talked several times about this in the past, and we keep hoping for better news than what we’re getting, right? You know, farmers are receiving another round of tariff aid payments, which we’re grateful for, but it will not come close to making us whole. Especially as we look at this long term, the damage just continues to mound.

Ryssdal: OK, on to other topics. The real reason we want to get you on the phone was a piece I saw I think in Bloomberg the other day about the weather and how hot it is, and how your hogs are getting skinnier because it’s so hot, and that’s pushing prices up. Is that really happening?

Duncan: Well, it may be not quite that simple, but yes, that does happen. Hot weather slows the growth of hogs, even though we keep them in a really nice, environmentally controlled buildings. The heat we can’t do much about, and they don’t gain as fast, and that did happen in July. We saw some marketing’s back up and some marketing slow. But Kai, those pigs come to town eventually.

Ryssdal: I guess they do. Where are you selling them these days? I mean, we used to do big pork business with China, but now we don’t so much. Where’s your market?

Duncan: Oh man, you bring up China, and it’s like a knife in my heart because there is tremendous potential there, Kai. Especially with the massive losses they’ve suffered in their hog herd due to African swine fever. Domestically, we consume a lot. We are moving some product back to Mexico. We are at a 10-year low on product into Japan because we find ourselves at a disadvantage with the countries that join Japan in [Trans-Pacific Partnership]. Well, I guess that’s another knife in my heart, that we’ve talked about in the past.

Ryssdal: And I didn’t even bring that one up. You did it to yourself.

Duncan: So we’ve again seen with the flare in the Chinese problem, the hog market reacted almost immediately because there are still hopes for us to move some product into the Chinese market. But that’s about all it is right now is hope.

Duncan: You’re right. You’re right. What do you want me to do, quit? But then who are you going to call when you need to talk about hogs, Kai? I’ve got to stay in business, and I’m doing it just for you. But yeah, still the reality is: We’ve got a growing world population, and they need to eat. And at some point, we hope cooler heads prevail, and we can get some deals done. But you are right, Kai, I think in the countryside, the volume of hope that farmers had has definitely gone down over the last year and a half as we’ve watched events unfold.