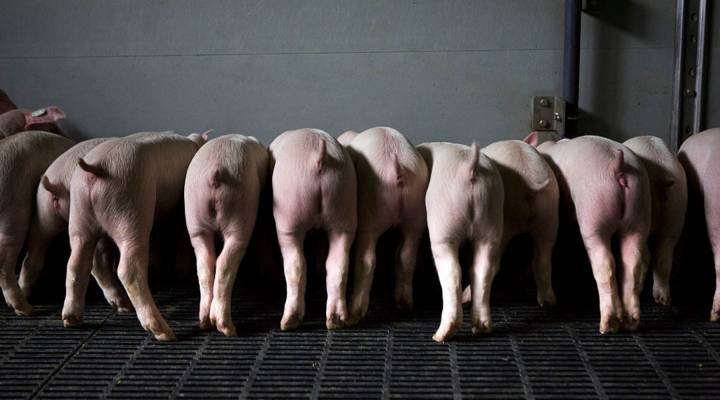 The Chinese consume over 50 million tons of pork annually, and part of that meat is from U.S. farms. After the Chinese government announced its 25 percent tariffs on U.S. pork, Marketplace host Kai Ryssdal talked to Brian Duncan, a hog farmer and vice president of the Illinois Farm Bureau, about how it will affect his business. The following is an edited transcript of their conversation.

Kai Ryssdal: I’m sure you’ve been following the news. How flatfooted, though, were you caught by the fact that these sanctions are apparently coming?

Brian Duncan: Agriculture has been concerned about the overall tenor on trade since prior to the presidential election. Quite frankly, we’ve been watching. I mean, all the candidates seem to be running away from trade, and we’d hoped once when President Trump got in office that calmer heads will prevail and we wouldn’t be in the situation we’re in now. So I guess we’ve been concerned. We’ve been hoping that the processes that are in place to address trade concerns, say through the WTO, would be utilized instead of a tit-for-tat tariff situation that we find ourselves in now.

Ryssdal: How important is China to the American hog industry?

Duncan: Well, it’s important. It’s really important in that it’s a growth market for us, No. 1. Where we’re at with China right now is not what we hope to be in five or 10 years. And they are also very important for cuts of meat called variety cuts that really don’t have much value in other parts of the world, including here — think things like snouts and tails and hooves and ears. Things that the Chinese consumer places value on probably would find its way into dumpsters in other parts of the world. So that’s an important market, because it adds value to the overall hog.

Ryssdal: Right, which is fundamentally more money in your pocket, right?

Duncan: Oh, absolutely. The saying is, “We like to market everything but the squeal.”

Ryssdal: That’s pretty good, I never heard that. How long do you figure it’s going to be before this actually hits you in the bottom line?

Duncan: Well, I think it already has. I think the psychology has negatively impacted the hog market ever since that the tariffs on steel and aluminum hit. We’ve seen the futures markets on the Chicago Mercantile Exchange as well as the cash market drop by nearly $20 a head. And there are some other seasonal fundamentals there, but it’s not all seasonal. This negative attitude towards trade, especially in my business, support production, where we are heavily export dependent to the point of nearly 30 percent of our production is exported. And when we see this attitude towards China and also tough talk on NAFTA, we saw withdrawal from TPP, which was going to be a very beneficial agreement for pork producers, I think that’s all combined to a negative psychology. There’s already casualties in this trade, escalating trade fight.

Ryssdal: Talk to me for a second, would you, about the hog infrastructure, because you guys need processing plants and you need, you know, trucking and all of that stuff to get the product to market. Is this an environment friendly to that kind of investment for you?

Duncan: Well, absolutely not at this point. Markets hate uncertainty, investors hate uncertainty. And in agriculture, we battle a lot of uncertainties, be it the weather or disease, what other factors we can deal with out here in rural America. Now we add the uncertainty of trade of our markets and that’s not conducive for investment. And the pork industry, over the course of the last three or four years, has made significant investments and improvements. There have been new harvest facilities, there’s been new production facilities come on line because pork is the meat of choice around the world, and we are the low-cost producers. We thought we had a trade agreement in place, we thought we knew what the rules of the game were, and we’re positioning to take advantage of that. Now we may find ourselves on the outside looking in, and there are plenty of other countries who will be willing to fill those markets.

Correction (April 12, 2018): An earlier version of this story misspelled Brian Duncan’s name. The text has been corrected.