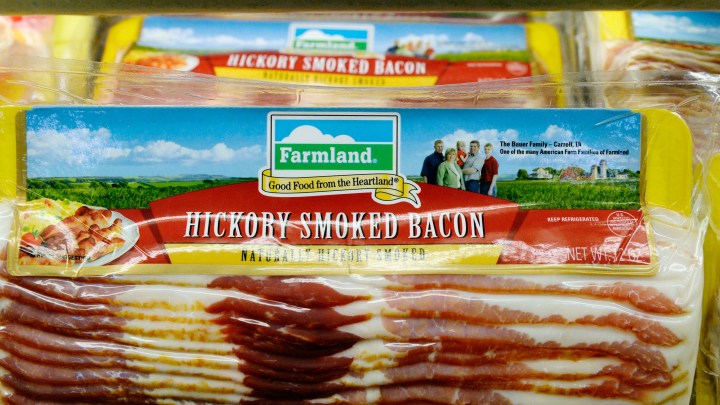 COPY
Smithfield Foods, a Chinese-owned company, is warning of a pork shortage. Smithfield owns the Farmland brand, shown above at a supermarket in Los Angeles in 2013. Kevork Djansezian/Getty Images
China

Smithfield Foods, a Chinese-owned company, is warning of a pork shortage. Smithfield owns the Farmland brand, shown above at a supermarket in Los Angeles in 2013. Kevork Djansezian/Getty Images
Listen Now

African swine fever is wiping out millions of pigs in China, and that’s starting to ripple through the global economy. While the disease doesn’t affect humans, it’s deadly to hogs and doesn’t have a cure.

Some analysts and pork producers are warning that it’s only a matter of time before the problems in China start showing up in American prices for ham and bacon.

“We are currently estimating they’ve lost about 55% of the herd, or roughly well over 200 million head of pigs have been lost in the last year,” said Christine McCracken, senior protein analyst at Rabobank.

“You’re talking about a supply larger than the entire European pork industry or nearly double that of the U.S. That’s what’s been lost so far,” she said. That shortage is driving up global prices for pork as China seeks to import as much pork as it can, increasing demand and pushing up prices in the producer countries. It’s also affecting other types of protein like chicken and fish as Chinese consumers look for alternatives. The cost of pork has skyrocketed in China since the outbreak of the disease.

American pork producers aren’t getting as much of this business as they could, said Michael Nepveux, an economist at the American Farm Bureau Federation.

“Even though U.S. pork producers stand primed to be able to … get as much of their pork into the hands of Chinese consumers as they can, we’re still facing upwards of 62, 63% tariff going into the country,” Nepveux said. “Even with that in place, China has been purchasing huge amounts of pork … far more than they have in the last several years just because they’re really in desperate need of pork.”