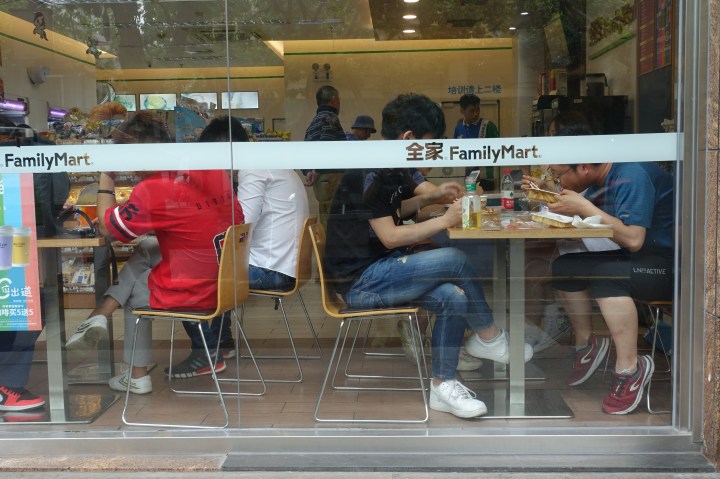 COPY
Workers on a lunch break in Shanghai. According to the job site, Zhaopin, the average worker spends 20 yuan ($2.90) or less per lunch. Convenience stores like this one are one of the few places that offer cheap meals in office areas. Charles Zhang/Marketplace

Workers on a lunch break in Shanghai. According to the job site, Zhaopin, the average worker spends 20 yuan ($2.90) or less per lunch. Convenience stores like this one are one of the few places that offer cheap meals in office areas. Charles Zhang/Marketplace
Listen Now

According to government figures released last month, inflation in China in May rose by 2.7% from a year ago.

But people in the financial hub of Shanghai complain that the cost of living is rising much faster, especially when it comes to paying for food and rent.

Marketplace sent members of its China bureau on a mission: Could they manage to live on the average monthly wage in Shanghai? Here is what they found.

According to the latest statistics from the Shanghai government, the average monthly wage in 2018, after deducting tax and social welfare contributions, was 7,200 yuan ($1,047).

Finding affordable accommodation is not easy in Shanghai. Some low-skilled jobs in places like restaurants, spas and construction sites often provide room and board for workers.

It is common for white collar workers from Shanghai to live with their parents until they get married and have their own property. The rest of the people must rent.

According to the Chinese investment bank Guotai Junan Securities, the average monthly rent per person in Shanghai in June was 2831 yuan ($412).

Marketplace found an affordable place, one-third cheaper, but the apartment was shared with three other roommates.

“The rent may increase 8% to 12% the following year,” said realtor Deng Lulu. However, the rent has sometimes gone up higher than 30% in that price bracket.

The distance from the apartment to the Marketplace office is almost 9 miles, further than the average commute for city workers of 7.7 miles, according to a 2018 report by data aggregation company Jiguang.

A car is still a luxury item for most families in China.

“In Shanghai, the average age people get their first car is 28 years old, usually after they’ve worked for a few years,” said Min Zhihao, a sales director at Car King, one of the city’s biggest sellers of used cars.

Min said his big sellers, which can cost even more, are Audis, BMWs and Mercedes-Benz.

However, even if after qualifying for a loan, Min said the car registration is more expensive than the vehicle, at 90,000 yuan ($13,000).

Being able to drive also comes down to luck. To control traffic congestion and cut down air pollution, Shanghai restricts the number of car registrations through an auction system.

According to local media, 9,000 license plates were released in March. That’s not a lot in a city of 24.2 million people.

“I had a friend bid for four years in a row before he got a car registration,” Min said.

If Marketplace buys an electric vehicle, the government will issue a car registration for free — it’s a bid to to encourage green energy consumption. But the procedure, Min warns, isn’t that simple.

Looks like we’ll stick to the subway and bus system, a 50-minute commute to the Marketplace office.

Public transportation in Shanghai is clean, efficient and will cost us only a dollar a day to get to and from work.

Cooking at home is the best way to save money. But the price of pork, a staple in the Chinese diet, shot up by 21% in June from a year earlier because of African swine fever.

Fruit prices went up by 42.7% in the same period because bad weather affected supplies. On top of that, imports from the U.S. have been slapped with tariffs in the trade dispute.

The term “fruit freedom” has become a buzzword on the internet as consumers complain that prices have soared so high that they cannot afford simple pleasures like lychees or imported cherries without worrying. The term has been picked up by local media and also included in Baidu’s version of Wikipedia.

Not everyone has time to shop for groceries and cook. On average, people in China work 12 hours more than their counterparts in the U.S. and a six-day work week is normal for Chinese workers. As a result, they eat out a lot.

People in China are big savers. Car sales director Min said that when he first entered the work force, he saved 50% of his income. That allowed him to buy his first car, a used Buick Sail, at the age of 24.

Most people save for when they, or their elderly parents, get sick. According to China’s National Bureau of Statistics, health care spending went up by 16.1% last year.

Others save for old age, unemployment and for their children’s education.

According to the latest data from the Shanghai government, issued in April 2013, 67% of those surveyed saved between 11% and 50% of their income.

Most people interviewed by Marketplace earned less than the average wage and said they saved even more. We will take the average, saving 31% per month.

Even if we factor in the typical wage increase of 7.9% this year, it would still leave us with just under $50 a week for clothing, going to restaurants with friends, movies and travel — things that can cost the same in Shanghai as in the United States.