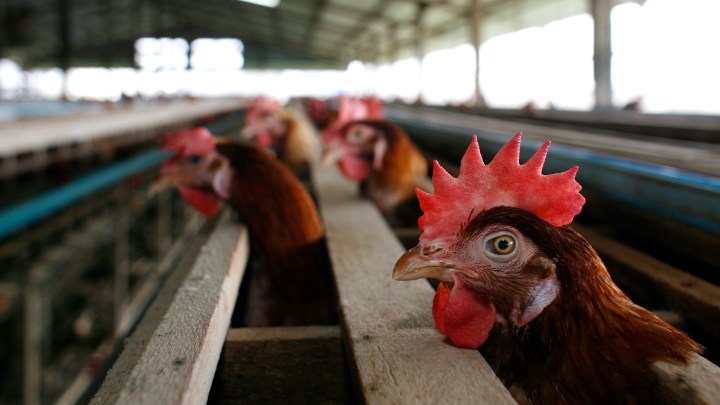 COPY
Animals that eat pricier corn are now costing more per head, like chickens. Plus, people have been eating more chicken during the pandemic. Paula Bronstein/Getty Images

Animals that eat pricier corn are now costing more per head, like chickens. Plus, people have been eating more chicken during the pandemic. Paula Bronstein/Getty Images
Listen Now

The Bureau of Labor Statistics’ monthly consumer price index — a read of inflation — comes out Wednesday. Keep in mind that a few months of higher prices does not mean an inflation trend. But certain commodities have been getting more expensive.

On Monday, copper hit an all-time high. Now raw food commodities, such as wheat, corn and soybeans are getting pricier. And when that happens, those price hikes can ripple throughout the supply chain.

One big reason why the price of corn is up about 50% this year is because of a different pandemic. African swine fever crippled pork production in China, which is now trying to buy up corn to restore its pig population.

“So China has turned to U.S. corn, and that drives prices in the United States,” said agriculture professor Daniel Sumner at University of California, Davis.

He said American farmers have been growing more corn to meet demand, so they have less room for other crops.

“Corn takes land away from wheat. Well, that reduces wheat supply, and you increase the price of wheat as a consequence,” Sumner said.

He said that’s driving up the price of pork, beef and also chicken, which people have been eating more of throughout the pandemic.

“So in reality, you got strong meat demand pulling prices up, and you have higher costs of production that are pushing them up, and it’s both of those that are leading to higher chicken prices,” he said.

Tonsor said those prices are being felt by restaurants and grocery stores.

At Hawaii Supermarket near Los Angeles, manager Chris Duong said his chicken suppliers are charging 10% to 15% more for the chickens he buys.

“That’s pretty big. Meat prices usually don’t fluctuate that much.” He said beef and pork have been getting more expensive, too.

Duong said independent grocery stores like his operate on slim margins, so he has little choice but to pass the higher prices on to consumers.

“You know, in times like these when … everything’s going up, all the costs are going up, we kind of have to.”

Duong said that means charging a dollar more for every whole chicken he sells. That dollar is roughly his entire profit margin.