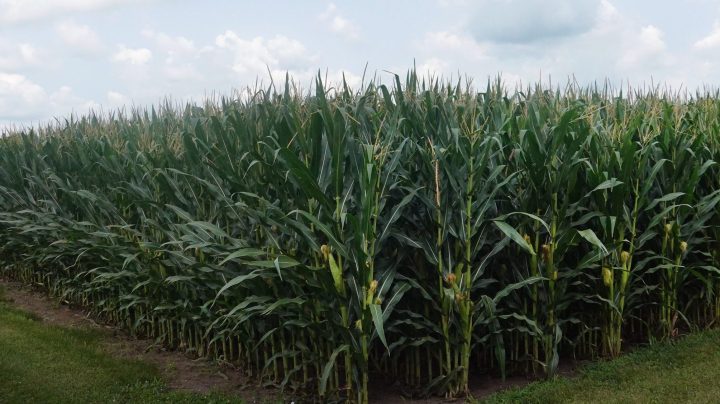 The U.S. Department of Agriculture lowered its September harvest estimate for corn after little rain and above-average temperatures along the Corn Belt the last month.

But Keith Alverson, a corn farmer in Chester, South Dakota, is optimistic. One reason: Corn prices have risen to around $7 a bushel compared to $6 a year ago.

Kai Ryssdal: It has been a number of years since we’ve spoken to Chester, South Dakota. How are things down on the farm?

Keith Alverson: Well, you know, we’ve kind of gone through some wild swings in years in regards to the weather. 2019 was was really wet, 2020 was kind of wet, and then 2021 and then this year are drought years.

Ryssdal: So what does that translate into for you in terms of crop yields and fundamentally your business?

Alverson: So last year, we had about half or two-thirds of a crop, just a shade over this year. I think things are going to be better with the increase in crop prices, though. That still means things are looking all right if we can get to average crops or close to average.

Ryssdal: Yeah, let’s talk about prices. I’ve spoken to a couple of farmers the last number of months, and the thing both of them said — one was a hog guy, and the other one was an apple guy — they both said farmers are price takers, not price makers, which makes complete sense when you think about it. What does that translate into for you? Are you you’re watching prices go up, I guess, for corn and grains?

Alverson: Yeah, it’s been a little bit choppy. But, you know, last week, or earlier this week, I should say, the USDA came out and kind of followed up some of the private estimates of a lower corn yield. Kind of been a yo-yo this summer because the whole supply and demand situation. It’s just we’ve had a kind of short crop last year, and we needed a big crop this year, and it doesn’t look like we’re gonna get really a bin buster across the nation. And so, it’s got to find that price point where it rations off the use.

Ryssdal: Bin buster, I like that. Look, grain is, nominally anyway, a global market, right? And I wonder how or if you are being affected by the Ukraine thing and their grain challenges? And is that sort of trickling down?

Alverson: The market folks that I listen to or talk to say that it is because there’s a fair amount of wheat supply from that region. And while I don’t grow wheat, wheat competes for acres that have corn and soybeans on it as well. And so if you shift an acre someplace in the United States to wheat because of the prices there, it might not be in corn or soybeans, and so it all makes for a shorter world supply. They kind of consider wheat a feed grain similar to corn. And so it can be used, I wouldn’t say exactly interchangeably, but it can be used in replacement of corn or vice versa.

Ryssdal: Can we talk inputs for a second, and I want to get your thoughts on inflation, which as we saw the other day, is not going anywhere. That must be a factor for you?

Alverson: Yeah, it sure is. The increased grain prices is helping some. You know, my fertilizer prices between last year and this year have nearly doubled. And I think a lot of that tracks with energy, which is up a lot. I was just talking with a part supplier this morning that you can’t find a certain drive belt for one of our combines. He’s like, ‘There on backorder until 2023.’ And so it’s some of those little things that if ours would happen to go out, we’re kind of shut down, you know, you can’t operate the machine. And it’s $150 part that kind of a name your price for it. And so, we see those sorts of supply shortages, and then just general inflation of things. My fertilizer prices are up. My herbicide and pesticide prices are up, and I know that they’re gonna go up in seed. You know, the cost of having employees and trying to find farm labor is a challenge, just because it’s really competitive out here.

Ryssdal: So, net net, right? The prices you’re getting in market up somewhat, but you’ve got inflation to deal with. Are you doing better than last year, worse than last year? I mean, you know, food’s getting on the table, right?