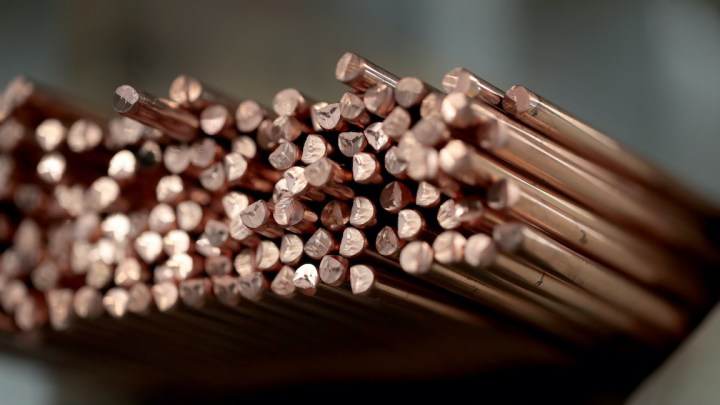 COPY
A new copper mine can take five to 10 years to come online. Above, copper rods used in machine parts. Scott Olson/Getty Images

Monday, the price of copper hit an all-time high, reaching past $10,700 a ton. It’s up 20% over the last month. Steel’s up double digits too, as is iron ore, where steel comes. Turns out this is about way more than the pandemic recovery.

“Coming off the COVID-19 pandemic, iron production supply is not ramping up as fast as demand is right now,” said Rohan Reddy, a research analyst at Global X. Economies are booming, gobbling up materials, prices rise. Manufacturers are waiting three months for steel orders.

But the story of these metals is bigger, believe it or not, than the pandemic, tied up in big moves in the global economy.

China’s belt and road initiative, President Joe Biden’s infrastructure proposal, Europe and India’s Connectivity Partnership — they all need basic metals. And then there’s the colossus on the horizon: the shift to a greener economy.

“If you want to take fossil fuels out of the global economy, you have to put something in,” said Michael Widmer, a metals analyst with Bank of America.

So copper, which in particular has been on a tear, is a key ingredient in electric cars, wind turbines and batteries.

“This green growth phenomenon is going to involve the U.S., the [European Union] and China all competing for resources,” said Chris Berry, president of House Mountain Partners, which focuses on strategic and critical metals.

And suppliers are not ready to meet that demand. Investment in copper production has been low for the past decade. A new copper mine can take five to 10 years to come online, Berry said.  We’re going to need more copper a lot sooner than that.

“I think the market in particular is just waking up to the fact that there is an enormous demand shock on the horizon,” he said.

The world is scrubbing the rust off its metal supply chain. You can see the future of the global economy in its reflection.