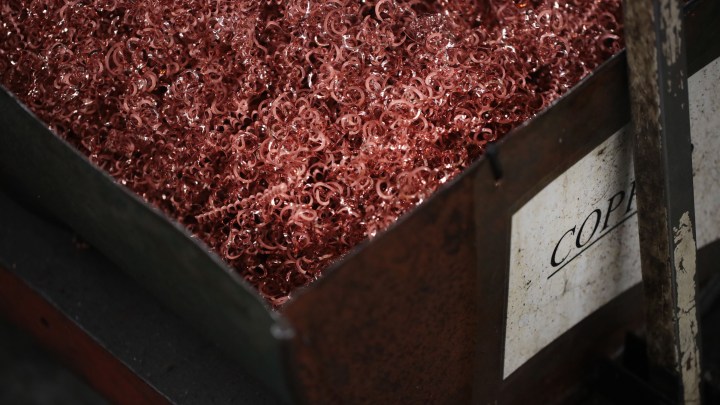 COPY
Copper scrap left over from machining. The price of the commodity reached an all-time high in the spring but has recently declined. Scott Olson via Getty Images

Copper scrap left over from machining. The price of the commodity reached an all-time high in the spring but has recently declined. Scott Olson via Getty Images
Listen Now

Here’s an economic indicator for you: copper. If you’ve been paying attention to the copper market, you might be a bit worried. After reaching an all-time high in May, copper prices have tumbled around 10%.

Yes, other commodities are seeing similar dips. But when it comes to forecasting the macroeconomic future, copper has its own special reputation.

So much so that the slang term commodities traders use for the copper market is Dr. Copper. It’s thought to be so good at predicting the economy, it has a Ph.D. in economics.

“So, that’s where the nickname comes from. Copper has always been viewed as a precursor for the direction of local and global economies,” said Bob Iaccino, a Chicago-based commodities trader.

He said the reason is pretty simple. “Regardless of what era you’re talking about economically, copper has been a factor in anything that needs to be built.”

That includes things like plumbing, electrical wiring, bullets and cars. So, when prices rise, that could be a sign that gross domestic product is about to grow. The same can be said when prices go in the opposite direction.

“There was a day when it broke substantially. It had fallen like 15 cents a pound, that was truly a wake-up call,” said Phil Streible, chief market strategist with Blue Line Futures.

The recent dip in copper prices can be traced to many things, he said: tapering the Federal Reserve’s stimulus, the delta coronavirus variant, but mostly, “copper’s really connected to the Chinese economy.”

​China is responsible for about 50% of the world’s copper consumption. The drop in prices coincides with a general cooling of the Chinese economy, Streible said.