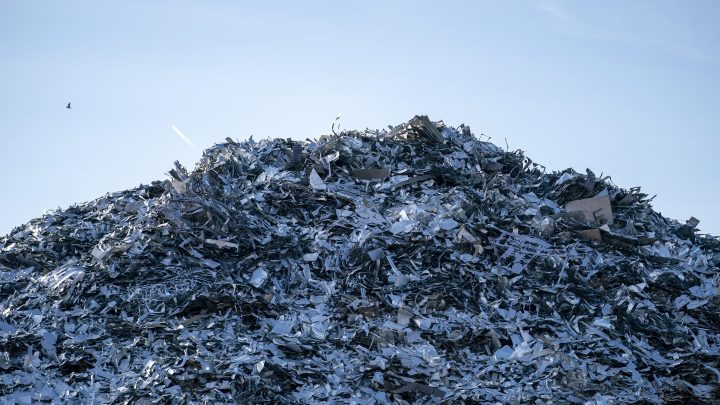 COPY
A mountain of scrap metal in Liverpool, England, waits to be exported. Christopher Furlong/Getty Images

In May 2018, in an effort to crack down on environmental concerns, China announced it was restricting imports of most U.S. recyclables. The news sent the American recycling industry into a panic, with scrap dealers trying to find new buyers. The escalation of the U.S.-China trade war didn’t help the industry calm concerns about rebuilding a relationship between the two countries.

Randy Goodman is the executive vice president for Greenland America Inc., which specializes in selling scrap metals like copper and aluminum. He spoke with “Marketplace” host Kai Ryssdal about the process of finding new countries to take scrap metals and what copper prices mean for the larger economy. The following is an edited transcript of their conversation.

Kai Ryssdal: So we had you on last May of 2018. The trade war was in its early stages. The Chinese had just sort of launched an environmental crackdown, which was affecting the scrap and recycling business. And we had a chat about how business was back then. How you doing now in August of 2019?

Randy Goodman: Well, it’s been a roller coaster for the past year and a half, between the environmental issues with China and how they’ve locked things down. In the trade war, it’s made for interesting business times over all aspects of scrap: metal, plastic, glass, paper, all of it.

Ryssdal: How’s the trade war hitting you, though, sir? That’s the question.

Goodman: Over the last couple of months, it’s gotten pretty bad in certain situations. Because if they’re not buying, then they’re either sucking other materials in to replace it, or there’s excess surplus of materials around the world because China’s simply not been in the market for a lot of them. And they have not found all the homes that they want to.

Ryssdal: So talk to me about that surplus, right? Because when you got more of something, the price usually goes down. Are you getting hit by that?

Goodman: It has gone down precipitously over the last year in multiple commodities. And that all comes back to the issue that China’s not buying those materials and most likely will not ever again, even if the trade war’s settled. China has made a drastic change in how they’re viewing scrap, and they’re eliminating the parts of it that can get them into environmental troubles and only importing what seems to be furnace-ready material for manufacturing.

Kai Ryssdal: So when you go looking for new customers, I guess is what you say — new destinations for the scrap that you get — where do you look?

Goodman: First of all, you do see some of the people that were in China starting to relocate their businesses in other parts of the world, for example Indonesia, Thailand and Malaysia. That being said, it’s still not a replacement for those tonnages. Over the last year and a half, we’ve been lucky enough to have India with an appetite, but they have a limit to what they can consume also, and with no new facilities being built to smelt copper or smelt aluminum, there seems to be more supply than demand in  a lot of categories right now.

Ryssdal: That would seem to be a business model problem for you. What are you going to do?

Goodman: Well, I think that we’re continuing to look as an industry at where people are building new infrastructure around the world and where they might be interested in consuming that material. And you just have to put your ear to the ground and take some plane rides.

Ryssdal: Without wanting to prejudge in any way, what’s your level of recession worry? Is there a thing you’re looking at?

Goodman: A couple of things. I mean, there’s been several articles in our trade magazines that reference Dr. Copper.

Goodman: Dr. Copper, meaning that copper can kind of diagnose where we are going in the economy. And if you read those, they kind of tell you that copper is going down precipitously, as it has over the last couple of months. It’s a very fine indicator that not that you’re coming into a recession, but you’re already there.

Goodman: Well, others would tell you that we’re not, but whether we are or not, the scrap industry from all sides has been suffering for the last year. So it’s going to be an interesting ride for the next several.