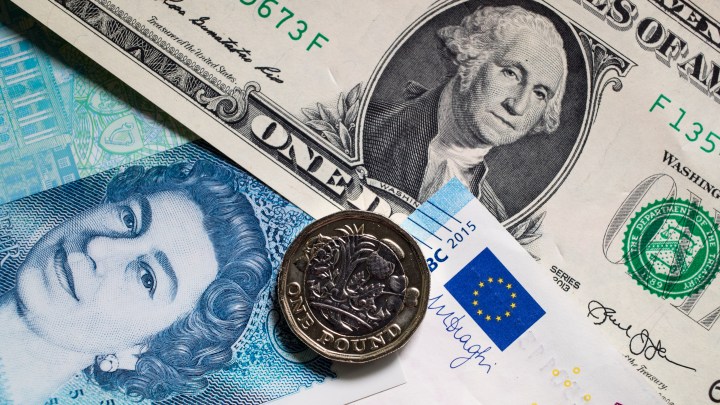 COPY
A strong U.S. dollar is great for Americans who want to buy foreign products. For American companies that sell products abroad? Not so much. Matt Cardy/Getty Images

A strong U.S. dollar is great for Americans who want to buy foreign products. For American companies that sell products abroad? Not so much. Matt Cardy/Getty Images
Listen Now

Excess inventory isn’t the only problem prompting earnings warnings. Consumer spending is softening — and then there’s the strong dollar. Compared to a basket of other currencies, the greenback is up 14% over the past year. That’s recently been cited as a drag on profits by Microsoft and Salesforce.

The dollar had been getting stronger for most of the past year, but it really took off a few months ago, according to Harvard economics professor Kenneth Rogoff.

“Now that the Federal Reserve is out there raising interest rates, the dollar’s been going up sharply,” he said.

Higher interest rates have been making U.S. treasury bonds more attractive. And to buy U.S. treasury bonds, you have to have dollars. “You’re not getting that to the same degree on the euro, or pound, or the yen, and so money flows toward the United States, and that bids up the dollar,” Rogoff said.

American multinational companies have been earning a growing share of their revenue from abroad, said Teresa Fort, a professor at Dartmouth College.

“And the fact that many of these big corporations are upset about the dollar strengthening kinda gives us a signal of just how important those foreign sales have gotten,” she said.

Fort has been looking into American manufacturers that both make and sell products in the U.S. and overseas. “Their foreign affiliate sales are three-quarters of the size of all their U.S. establishment sales. So they’re almost the same size.”

The dollar won’t stay this strong forever. Other central banks are starting to do what the Federal Reserve’s been doing, said Jay Bryson, chief economist at Wells Fargo.

“I mean, if you look at the European Central Bank — you know, earlier this year, nobody really thought that the ECB would be raising rates this year. Now, it seems like it’s a foregone conclusion that’s going to happen.”

And there are also plenty of signs that inflation in the U.S. could be cooling down, said Chuck Tomes at Manulife Investment Management.

And if that continues? “It wouldn’t surprise us to see the Fed maybe not deliver on as many hikes, rather than more hikes,” Tomes said.

And that could help bring the dollar back down to Earth.