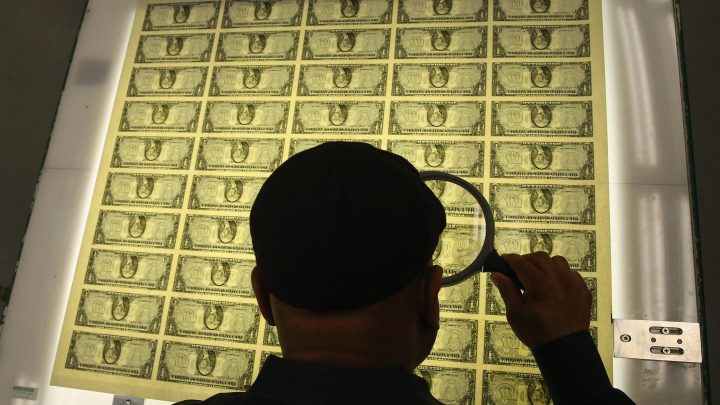 From presidential tweets to corporate earnings reports, the U.S. dollar has been getting a lot of mentions recently.

Earlier this month, President Donald Trump tweeted that the U.S. should “MATCH” the “currency manipulation game” he said China and Europe were playing in order to compete with U.S. companies.

Members of the Trump administration, including Treasury Secretary Stephen Mnuchin and Chief Economic Adviser Larry Kudlow, have been repeatedly asked about the dollar in interviews. Meanwhile, many U.S. companies said the strong U.S. dollar cut into their profits last quarter.

We’re going to take this moment to explain why people are talking about the dollar and why it matters whether it’s strong or not. First, let’s tackle those corporate earnings reports.

“I think that there’s two things to really be highlighted in the last few quarters that look like they’re a continuous trend,” said Wolfgang Koester, chief evangelist for Kyriba, a cloud software company that puts out a report every quarter on the effect of currency fluctuations on corporate profits.

Compared to other currencies, like the euro and the peso, the dollar is worth more this year than it was this time last year. You can read about how that’s changed over time here. But the point is: the dollar’s trading higher right now.

“A strong dollar, if we’re going to talk about U.S. corporates, is really not beneficial to US corporates because, at the end of the day, the money they make outside the United States is worth less and their products are more expensive,” said Koester.

When the dollar is trading higher, it takes more foreign currency for consumers overseas to buy American stuff, which is bad for the companies that make American stuff.

“But more importantly for corporations,” Koester said, “while you’re seeing a stronger dollar you’re seeing it more volatile, and that typically happens when the fundamentals are pointing one way but the messaging from the government [is pointing] the other way.”

However, President Trump has made comments that suggest he’d prefer a weaker dollar. Speaking at the annual Conservative Political Action Conference in March, he said: “I want a strong dollar, but I want a dollar that’s great for our country, not a dollar that is so strong that it is prohibitive for us to be dealing with other nations.”

A key point he’s making there is that currency operates in a global economy, too.

“So he explicitly doesn’t mention it, but he wants the Fed to engineer lower interest rates and, in doing so, that helps to weaken the dollar,” said Kathy Bostjancic, chief U.S. financial economist at Oxford Economics. “He’s very focused on the trade balance and he would argue that a weaker dollar would help facilitate exports abroad.”

But exporters’ interests aren’t the only interests that matter in this economy. Bostjancic pointed out that a weaker dollar makes imports from abroad more expensive. So when the dollar goes down, American consumers and manufacturers have to pay more for stuff from overseas.

It’s worth noting that the Federal Reserve doesn’t take the dollar directly into consideration when setting interest rates.

But here’s the point: “The U.S. dollar is not a managed currency,” Bostjancic said. “It floats freely against other currencies and it’s not managed by our government. It’s left up to market forces to determine that value.”

“Generally speaking, administrations and the U.S. Treasury will say that they’re in favor of a strong dollar because a weaker dollar can tend to be a reflection that our economy is weak not strong,” Bostjancic said.

“So while the administration and the president want a weaker dollar to promote exports, perhaps we should be thankful that the reason the dollar is stronger is because it is just one of the stronger economies out there right now.”

The president’s chief economic adviser, Larry Kudlow, had this to say on CNBC earlier today:

“Just in the past week we had a meeting with the president and the economic principals, and we have ruled out any currency intervention.”

Hours later at a press conference, however, Trump issued remarks that seemed to contradict what Kudlow had said on dollar intervention. “I didn’t say I’m not going to do something,” he told reporters.

Update (July 26, 2019): This story has been updated to include the president’s comment.