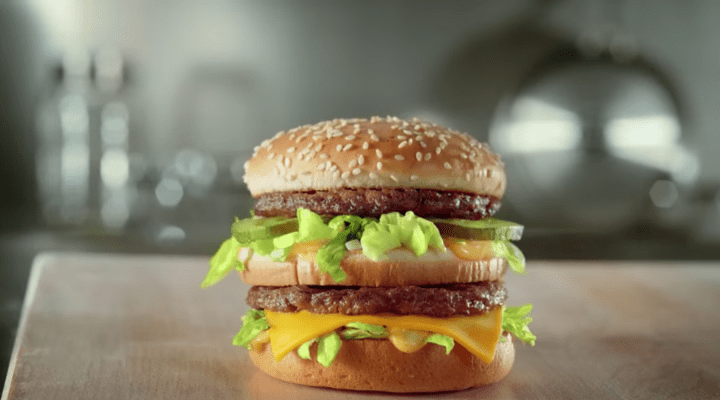 COPY
The idea is that by drawing such comparisons across countries, you can determine whether prices are too high or too low relative to overall economic output. Courtesy McDonald's via YouTube

The idea is that by drawing such comparisons across countries, you can determine whether prices are too high or too low relative to overall economic output. Courtesy McDonald's via YouTube
Listen Now

What can a Big Mac tell us about trade and what a currency is worth? Turns out, quite a bit.

Back in 1986, the Economist magazine developed a lighthearted index it dubbed simply the Big Mac index.

It compares the price of the popular McDonald’s sandwich in various countries. The idea is that by drawing such comparisons, you can determine whether prices are too high or too low relative to overall economic output.

On the global edition of the “Marketplace Morning Report,” Soumaya Keynes, the magazine’s trade and globalization editor, told the BBC’s Victoria Craig what the latest index reading shows. The following is an edited transcript of their conversation.

Soumaya Keynes: The Big Mac index is a lighthearted measure of currency valuation. It looks at the price of a Big Mac in different places around the world and says, “OK, well, if you have some dollars, where would that Big Mac be cheaper, and where would it be more expensive?” The idea is that you’re comparing the same product across space, and that should give you a fairly good idea of whether the currency is undervalued. So if that burger was really cheap, in, say, Thailand, then that suggests that their currency is undervalued relative to the dollar.

Victoria Craig: And you’ve just reassessed this index. What did you find? Which currencies are overvalued or undervalued at this point?

Keynes: We looked at the 20 currencies that the U.S. Treasury normally monitors, the big trading partners of America. And we found that if you just look at the raw prices — and sorry, there are a lot of bug-related food puns that go into this — then 19 are undervalued relative to the dollar. The Mexican peso is more than 50% undervalued. Malaysian, Taiwanese, Indian currencies, all undervalued. But the big story is that, actually, relative to fundamentals, the dollar is fairly strong.

Craig: What does a strong dollar mean for the United States and Americans?

Keynes: On a practical basis, it means that if you’re a tourist and you are American, you have dollars and you want to go around the world, then you’re going to have a pretty good time. Relative to America, other places are going to be cheap. However, that can be a problem if you’re trying to export products. Then having a very strong dollar means that you’re going to struggle to compete in foreign markets. This underlies one of the frustrations from U.S. policymakers — what they see is other governments trying to make their currencies artificially cheap, which is that they’re trying to get a competitive advantage over American exporters. And they see that as unfair.

Craig: And that brings us to the perfect next question, which is for the last four years, President [Donald] Trump has been arguing that China intentionally devalues its currency. Now when we look at the Big Mac index, it suggests China’s currency is overvalued relative to the U.S. dollar. So what’s with that discrepancy?

Keynes: When you adjust for the fact that actually poorer countries should tend to have lower wages and therefore lower prices, then China’s currency is overvalued. On the raw measure, China’s currency is undervalued. Historically, the Chinese yuan has been undervalued relative to what one might expect if pure market forces were at work. And that’s obviously generated quite a lot of U.S. frustration. Under the Trump administration, that’s been a bit weird because, actually, in some cases the Chinese government has been trying to stop the yuan from getting weaker.

What the Biden administration can learn from Big Macs

Craig: So, Soumaya, if the [Joe] Biden administration was keeping tabs on this Big Mac index, what do you think it suggests that perhaps they should be keeping an eye on over the next, I don’t know, year or so?

Keynes: Point one: I really don’t think that any policy should be made based on the price of a burger. But, if they were to try to do that, then you might want to look at the Vietnamese currency. Over a year when lots of currencies have been swinging wildly relative to other currencies, the Vietnamese dong has been staying remarkably constant relative to the dollar. Now that to the U.S. Treasury could suggest that the government is intervening. And in fact, the U.S. government has accused Vietnam of manipulating its currency, of intervening in foreign currency markets. There are another whole host of arguments for why, actually, you just might want to leave Vietnam alone. It’s a very small country. Do you really want to blast Vietnam? And, actually, there are lots of other bits of the relationship that you care about.