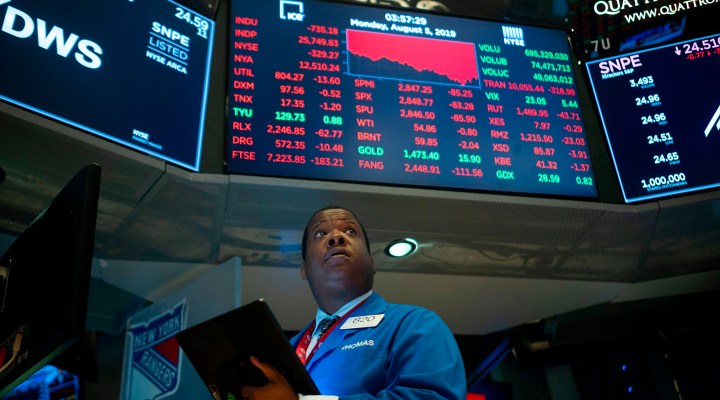 Traders work on the floor at the New York Stock Exchange on Aug. 5. JOHANNES EISELE/AFP/Getty Images)

U.S. stocks plunged to their worst loss of the year Monday and investors around the world scrambled to sell on worries about how much President Donald Trump’s worsening trade war will damage the global economy.

China let its currency, the yuan, drop to its lowest level against the dollar in more than a decade, a move that Trump railed against as “currency manipulation.” It also halted purchases of U.S. farm products. The moves follow Trump’s tweets from last week that threatened tariffs on about $300 billion worth of Chinese goods, which would extend tariffs across almost all Chinese imports.

The escalating dispute between the world’s largest economies is rattling investors unnerved about a global economy that was already slowing and falling U.S. corporate profits.

“I am surprised at the market’s surprise at China’s retaliation,” he said. “We started a fight, and when the opponent punches back, I’m not sure why we’re surprised.”

The sell-off began Monday in Asia, where indexes lost more than 1%, and intensified as it swept westward through Europe to the Americas. Investors in search of safety herded into U.S. government bonds, which sent yields plunging.

The yield on the 10-year Treasury note, which rises with expectations of stronger economic growth and inflation, fell to its lowest level since Trump’s 2016 election energized markets, down to 1.72% from 1.85% late Friday. The yield on the two-year note, which is more influenced by interest-rate moves from the Federal Reserve, sank to 1.58% from 1.71%. Both are unusually large moves.

A warning light of recession in the bond market also began shining more brightly, which traders said may have added to the selling pressure on stocks. When short-term Treasury yields are higher than long-term rates, a rule of thumb says a recession may arrive in about a year. The three-month yield was at 2% Monday afternoon, 0.28 percentage points higher than the 10-year’s yield. A month ago, it was 0.21 points higher.

“The market sell-off is showing that there is a severe lack of confidence that this is going to work out for us economically, at least in the short term,” Weiss said.

Of course, the U.S. economy is still growing, the unemployment rate remains close to its healthiest level in nearly half a century and U.S. stock indexes set record highs just over a week ago. But the escalating trade tensions and investors’ disappointment that the Federal Reserve didn’t commit to a lengthy series of interest-rate cuts at its meeting last week have since sent the S&P 500 on a six-day losing streak, its longest since October. The S&P 500 is 6% below its record.

“A recession is still unlikely, but the probability of it is higher, still at less than 20%,” said Nate Thooft, head of global asset allocation at Manulife Investment Management.

The biggest threat coming out of the past week, he said, is that all the uncertainty about trade will scare CEOs and shoppers away from spending. That would threaten the expected ramp up in growth that economists have been expecting later this year. He expects U.S. economic growth to muddle along. It may fall as low as 1% and make things feel like a recession, he said, but a real recession remains unlikely in part because interest rates are low.

Technology stocks bore the brunt of Monday’s selling, and Apple slid 5.2%. It not only depends on Chinese factories to assemble its iPhones, but China is also the only country aside from the United States that accounts for more than 10% of its sales.

Companies are in the final stretch of the latest round of quarterly earnings reports, and results haven’t been as bad as initially feared, though still down from year-ago levels. Profit for companies in the S&P 500 is now expected to contract by roughly 1%. That’s better than the nearly 3% drop expected earlier. More than three-quarters of the S&P 500 have reported financial results.

Meat producer Tyson Foods jumped 5.1% for the biggest gain in the S&P 500 after it reported profits that were better than Wall Street expected. It was one of only 11 stocks in the S&P 500 able to eke out a gain.

In Asia, where tensions between Seoul and Tokyo are worsening in a trade dispute entirely separate from Washington’s and Beijing’s, Japan’s Nikkei 225 index fell 1.7%, and South Korea’s Kospi lost 2.6%. The Hang Seng in Hong Kong dropped 2.9%.