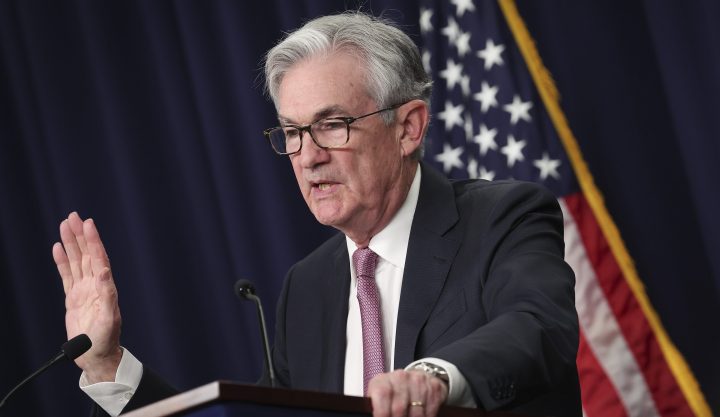 Federal Reserve Chairman Jerome Powell speaks Wednesday after the central bank decided to hike interest rates by half a percentage point. "It is essential that we bring inflation down," he said. Win McNamee/Getty Images

Federal Reserve Chairman Jerome Powell speaks Wednesday after the central bank decided to hike interest rates by half a percentage point. "It is essential that we bring inflation down," he said. Win McNamee/Getty Images

The Federal Reserve raised its benchmark interest rate Wednesday by half a percentage point, or 0.5%, the largest increase in more than two decades. This increase brings the so-called federal funds rate to a range of 0.75% to 1%.

The Fed’s push to combat inflation, which has reached a four-decade high, is expected to also include selling off billions in bonds on its balance sheet.

Here’s a look at why the Fed is raising rates and what it means for consumers, along with advice on how to navigate this period of economic change.

Why is the Fed increasing interest rates?

The short answer is to bring stability to prices for goods and services that have been rising at a dramatic pace.

At Wednesday’s news conference, Fed Chair Jerome Powell said: “The economy and the country have been through a lot over the past two years and have proved resilient. It is essential that we bring inflation down if we are to have a sustained period of strong labor market conditions that benefit all.”

The Fed has an inflation target of 2%, but inflation has been far exceeding that level, explained Andrew Jalil, an associate professor of economics at Occidental College.

While there are different metrics to gauge the rate of inflation, the government’s consumer price index for March measured it at 8.5% in the preceding 12 months — the highest rate in 40 years.

In turn, he added, that should dampen inflationary pressures. However, he pointed out that prices are rising for reasons beyond the Fed’s control, like pandemic-related supply chain disruptions and Russia’s war against Ukraine (which has led to increased costs for food and energy).

Will the Fed reach its intended goal?

Jalil said it’s hard to predict what will happen to the economy, especially because of the external factors stoking inflation. But he thinks inflation will eventually get down to the Fed’s 2% target as supply chain disruptions subside and the war in Ukraine, hopefully, ends.

“They’ve done an exceptional job at maintaining low, stable inflation close to their target since the early 1980s,” Jalil said.

How will the hike affect consumers?

Barrington pointed out that the 30-year mortgage rate rose by about 2% since the start of 2022, while the Fed raised rates by just 25 basis points, or 0.25%, back in March.

“That’s because the Fed’s really behind the curve when it comes to addressing the recent surge of inflation,” Barrington said. “You’ve already seen mortgage lenders, for example, take more decisive action.”

Lenders don’t necessarily have to wait for the Fed to raise rates, he added. “They can’t afford to get that far behind inflation because that means the money they get back from a loan is worth less than it was when they lent it out.”

Barrington said you’ll see direct impacts, though, with some credit cards, whose interest rates are directly tied to the federal funds rate.

The traditional, simplified logic around rising interest rates is that they’re bad for borrowers, who pay higher costs for loans. But, and here’s the silver lining, they’re good for savers because their accounts will yield more interest.

However, we’re living in strange times. The average interest rate for savings accounts has remained at just 0.06% for an entire year, according to the Federal Deposit Insurance Corp.

What advice do you have for consumers trying to navigate this period?

If you’re not able to pay off your balance every month, Barrington said, you should try more than ever to pull back on your credit card spending.

“This is an especially good time to avoid paying interest on your credit cards because it’s just getting more and more expensive,” he said.

He also pointed out that there’s been an increase in the popularity of adjustable-rate mortgages. But they should be avoided right now, he said, because you’re locked into a rate for a certain period, then the rate resets to current market levels.

“After that initial low-rate period, if the rates adjust up to market rates that have continued to move higher, those borrowers would see their monthly payments go way up,” Barrington said. “In a rising-rate environment, it’s much safer to lock in a fixed rate, so you know what your payments are going to be.”

Barrington added that it’s important for consumers to shop around for the best rates.

Do we really face the threat of a recession?

Deutsche Bank, for instance, has forecast that “we will get a major recession” caused by the Federal Reserve’s tactics to lower inflation, CNN reported.

“We regard it … as highly likely that the Fed will have to step on the brakes even more firmly, and a deep recession will be needed to bring inflation to heel,” Deutsche Bank economists wrote in a report.

At other times when inflation has reached comparatively high levels in the U.S., he said, the Fed has raised rates that led to recessions. But one reason recessionary forecasts could be wrong is the current inflation isn’t the result of normal conditions creating gradual price increases — it’s the result of “bizarre shocks” to the economy, Jalil explained.

Again, those supply chain issues and Russia’s war against Ukraine.

“If the news becomes much more favorable on both fronts, some of the inflationary pressures could naturally subside,” he noted.

Jalil offered another explanation for why we may not encounter a recession: The Fed is aiming for a healthy balance between demand and supply.

“It is possible that they could hit kind of a Goldilocks moment, where they don’t raise interest rates too high and cause a recession or keep them too low and fuel inflation, but rather where they raise them just at the right level to get demand to cool off,” he said.

Jalil added that if there is a recession, he doesn’t think it will be as severe as others in recent memory.

“Any recession is painful. But it’s likely to be milder,” he said. “The Great Recession in 2007-09 was caused by a financial crisis. Those are really challenging to resolve. The effects can linger for a long time.”

In this case, Jalil said that if the Fed induced a recession, its policymakers would likely lower interest rates once inflation dropped to their targets, which would probably help the economy recover fairly quickly.

Why is the Fed planning to shrink its balance sheet?

The Fed has a nearly $9 trillion balance sheet, which it’s been expanding since the financial crisis to help keep interest rates low and shore up the economy. It snapped up $4.5 trillion worth of Treasury and mortgage-backed bonds over the past two years alone in response to the downturn caused by the coronavirus pandemic.

The Fed announced at its March meeting that it plans to reduce its balance sheet by selling some of its bonds and provided more details Wednesday. Starting June 1, the Fed will reduce its holdings by $47.5 billion a month and increase that amount to $95 billion after three months.

Coupled with hiking interest rates, this strategy is meant to cool down the economy.

With the Fed selling these securities and increasing the supply in the market, borrowers will have to offer higher interest rates to find buyers. That will tamp down demand for credit and ease inflation, the theory goes.