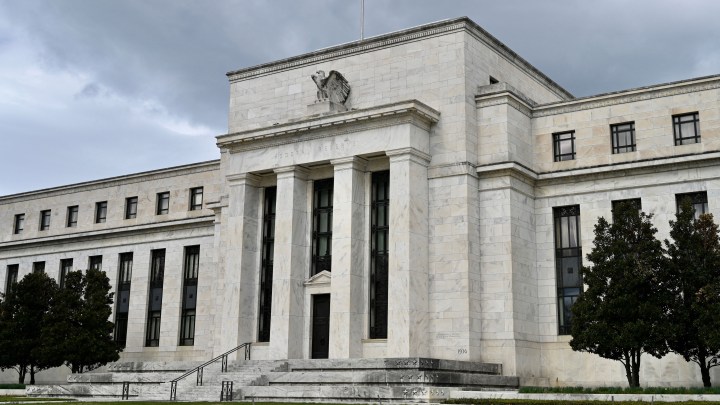 COPY
According to its March meeting minutes, the Federal Reserve will start selling $95 billion worth of bonds per month. Daniel Slim/AFP via Getty Images

According to its March meeting minutes, the Federal Reserve will start selling $95 billion worth of bonds per month. Daniel Slim/AFP via Getty Images
Listen Now

We got a regular peek behind the curtain at the Federal Reserve on Wednesday when the central bank released the minutes from its most recent meeting in March.

But raising interest rates is only one tool in the Fed’s arsenal. It can also raise and lower the temperature of the economy by buying and selling bonds, some issued by the Treasury, others backed by mortgages.

The central bank has purchased over $4.5 trillion worth of those assets since the pandemic tanked the economy in March of 2020. According to the minutes, the Fed will start getting rid of those bonds to the tune of $95 billion a month.

The Fed isn’t just an arbiter of interest rates or a banking regulator, it’s also kind of a bank itself.

“One way to think of it is it has a balance sheet, with assets on one side and liabilities on another,” said Tim Duy, an economics professor at the University of Oregon.

Ever since the financial crisis in 2008, Duy said the Fed’s been filling up its balance sheet with trillions of dollars’ worth of government bonds and mortgage-backed securities “as a mechanism by which it hoped to stimulate more economic activity.”

That’s because when the Fed buys government bonds, it reduces the supply of them on the market.

“And so by pulling those assets off the market, financial markets have to find other assets, and thereby push up the values of those assets,” Duy said.

At the same time, when the Fed buys bonds, it also increases demand for them by definition. That can also stimulate the economy, said Winnie Cisar, global head of strategy for CreditSights.

Lower interest rates and lots of liquidity in the economy are great when the Fed’s trying to spur a recovery. But now the economy is overheating.

So last month, the Fed stopped buying bonds. As a result, “it means there is one fewer very large buyer. Which means that other investors are going to have to step in and absorb whatever supply is available,” Cisar said.

In other words, the Fed is making it a little harder for consumers and businesses to spend, turning down the temperature of the economy with the hope of reining in inflation and loosening the tight labor market.