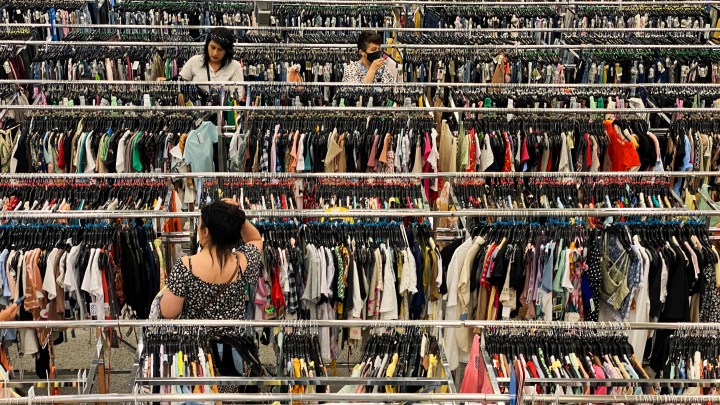 COPY
Americans are spending more money than they've got coming in each month. Patrick T. Fallon/AFP via Getty Images

Americans are spending more money than they've got coming in each month. Patrick T. Fallon/AFP via Getty Images
Listen Now

Whether we have hit peak inflation or not, consumers have been spending up a storm: 0.9% more in April than they did in March — when, by the way, their spending was revised up in Friday’s personal income and outlays report from the Bureau of Economic Analysis.

​It’s a sign that however consumers feel about inflation or the economy going forward, they’re feeling pretty flush — at least when it comes to pulling out their credit cards or dipping into their bank accounts to get what they want.

Americans’ incomes went up 0.4% in April. But here’s the thing: Personal spending went up 0.7%, and that’s after accounting for inflation.

“Things are looking pretty bright as far as the consumer is concerned,” said Dan Hadden, an economist at Nationwide. “What this is saying is that despite the higher prices that consumers have to pay, they’re still willing to go out and spend more.”

In fact, they’re spending more than they’ve got coming in every month. So how are they doing it?

“What you’re starting to see is people draw down some of the savings that they’ve accumulated over the past couple of years — from pandemic-era stimulus programs, significant wage gains or really just not being able to have an outlet to spend your money,” said Ross Mayfield, an investment strategy analyst at Baird.

Mayfield said consumers now have about $2 trillion in savings, but as they draw it down, they’re getting stressed. “You’re seeing the pressure on the consumer. And the consumer hasn’t cracked yet.”

But he added that there are signs of wear and tear. For one thing, continued high inflation has driven consumer sentiment down to rock bottom.

“Inflation in and of itself is one of the least popular phenomenons out there. It polls terribly,” Mayfield said. “But given the position of the consumer, they’re willing to survey that they hate inflation, and then still go out and spend anyway.”

But will people be able to keep up the spending from their savings? Not likely, according to Michael Pearce, a senior U.S. economist at Capital Economics.

“I mean, the saving rate’s fallen from above 8% at the beginning of this year to 4.5% now. And that’s just unsustainable,” he said.

Pearce predicts that in coming months, consumers will start pulling back to protect what’s left of their savings.

University of Michigan economist Betsey Stevenson thought that would already be happening with high inflation, rising interest rates and talk of recession.

“If the threat of a recession is looming, the smart thing to do is build your savings up,” she said.

But so far, Americans seem confident that they’ll keep their jobs and their pay will keep rising.