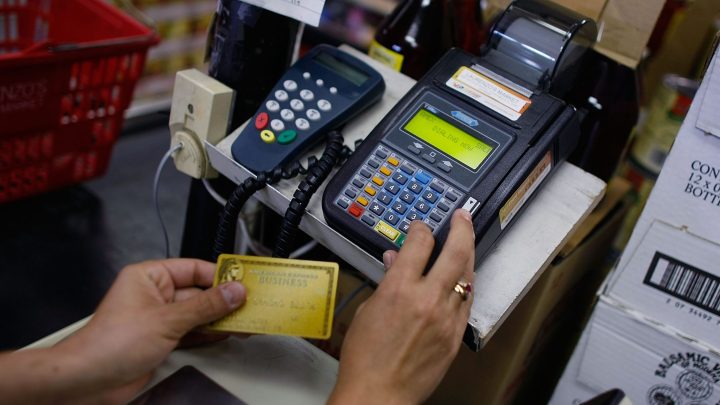 COPY
After paying down credit card debt for the past few years, Americans have gone back to high spending. Joe Raedle/Getty Images

After paying down credit card debt for the past few years, Americans have gone back to high spending. Joe Raedle/Getty Images
Listen Now

On Tuesday, the Federal Reserve Bank of New York will release a report on American households’ debt in the first quarter of 2022. That includes credit card debt.

Early in the pandemic, many Americans were spending less and getting help in the form of government relief checks and expanded unemployment benefits. So, credit card balances shrunk.

But in the last three quarters, balances have been growing. Combine that with rising interest rates, and it could be a problem.

David Silberman of the Center for Responsible Lending spent most of 2020 at home, working and hanging out with his grandkids.

“My credit card spending dropped. We weren’t traveling, we weren’t eating out,” he said. But since pandemic restrictions have eased, his credit cards have been used a lot more.

“One of my sons actually lives in Israel, so we got to see him and travel to Israel. My wife just got back from a trip to Amsterdam. I was just at a conference in California,” he said.

Silberman said his personal spending reflects a broader pandemic trend. “Early on, many of us were saving money and paying down our debts,” he said. Now, Americans are adding expenses back into the mix and charging them to credit cards.

“It means on one hand that they’re feeling good enough that they wanna take on that debt, but on the other hand they’re putting a burden on their balance sheet,” he said.

That burden is a collective $860 billion, according to the New York Fed’s last quarterly report.

“We’re basically giving back half the gains that we made in 2020 and early ’21,” Silberman said.

“It’s because of inflation. People are spending more. But higher interest rates is going to add insult to injury,” he said.

But rising rates aren’t likely to change the way we use our credit cards, according to James Choi, a professor of finance at Yale.

Unless Americans get more aggressive about paying down their balances, Choi said, their debt load will continue to rise.