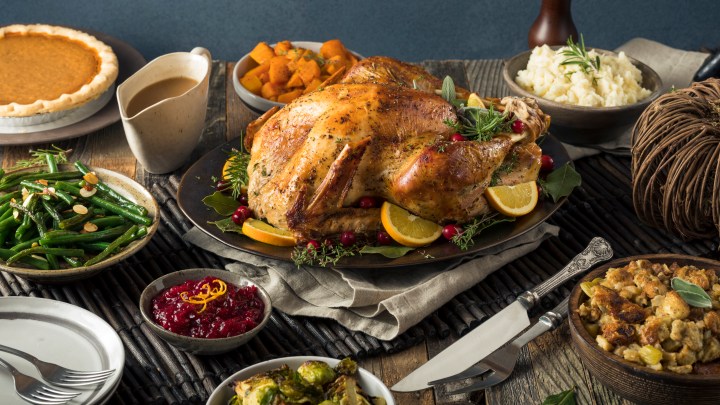 If the food won't put you in a coma this year, the cost of Thanksgiving just might. bhofack2 via Getty Images

If the food won't put you in a coma this year, the cost of Thanksgiving just might. bhofack2 via Getty Images

Inflation, worker shortages, delays in the global supply chain — by now, you know the drill. It seems no industry has been spared by the unholy trinity and, apparently, no holiday has either.

According to a recent American Farm Bureau Federation survey of Thanksgiving food prices, it’s likely to be more pricey than last year. The average cost for a modest 10-person feast will cost consumers around $53.31 — an increase of 14% from last year’s prices.

It’ll be more expensive, that’s true. Still, that’s less than $6 per person — less than the cost of a Big Mac Meal.

Your life’s savings are unlikely to be gobbled up this year by making the meal you always do, but your Thanksgiving celebration will still be impacted by global, economic forces.

How exactly? Let’s dig in.

Getting over the river and through the woods

Before we can even digest the costs of a Thanksgiving meal, you’ve got to get to where you’re intending to go.

If you’re planning to travel by road, pack a slightly plumper wallet, as gas prices are around the highest they’ve been since the holiday season of 2014. With more folks gathering this year, AAA recommends you account for some extra traffic time too.

Air travel is expected to be at or near pre-pandemic levels this holiday. Though that’s a great sign for airlines, it’ll also be a bit of a test.

Lately, airline companies have been plagued by flight cancellations. Staffing is critical to the success of the airlines in an industry that, like so many others, has been battling a labor shortage. The same goes for airports, which have struggled to fill positions at restaurants and in the TSA over the summer.

So while there may be a little extra wait time at your local airport Chili’s, there is some good news: The travel recommendation program Hopper predicts that air travel will be around 11% cheaper for domestic flights than in 2019.

In the weeks and months leading up to Thanksgiving, there was a looming warning: Turkey, the quintessential bone-dry bird of choice, may be in short supply.

The reality? Eh. Not so much. From Abilene, Kansas to Detroit, Michigan, local reports are finding that the Great Turkey Shortage of 2021 may not be so great after all.

Many local grocers are saying the same thing though: “Shopping early for the holidays is a wise strategy,” wrote Jim Dudlicek of the National Grocers Association in an email.

Though turkeys are likely to be in stock — if you get to the store early enough — they will be a bit more expensive this year. According to the AFBF, turkey costs were up nearly 24% since last Thanksgiving. That’s with an asterisk though, as the survey was done before many stores lowered turkey prices for holiday specials.

And senior economist Veronica Nigh noted that the holiday’s main dish comes with a main-dish price tag: Close to half of holiday meal costs are related to turkey, she said.

While no Butterball is going for its weight in gold, the big reason the bird is expensive enough to cluck about? It’s largely a result of pricier corn feeds.

The rest of the trimmings

Costs are up for side items, too, and extra store runs may be required. Just don’t bank on a day-of Target run for the add-ins you’ll inevitably realize you forgot only after toiling in the kitchen for hours, looking as sweaty and tired as if you just ran a Turkey Trot.

If you haven’t started your shopping yet, you may have a Black Friday-style duel for the last can of cranberry sauce. If you fancy yourself cranberry sauce that isn’t jiggly or perfectly cylindrical, you can opt for fresh cranberries, though they might cost you up to 11% more than last year.

According to the AFBF, those price increases are across the board: A dozen dinner rolls are up 15%. Canned pumpkin pie filling is up 7% and the oh-so-important whipped cream will cost you 2% more than last year. While those percentages may be high, the increases for individual items usually add up to pocket change.

For example, the survey found that the cost for a one-pound veggie tray, complete with carrots and celery, is up 12%. That translates into an additional 9 cents on your receipt this year. This year’s outlier was cubed stuffing, which dropped in price by 19%.

But why exactly are so many dishes getting more expensive in the first place?

According to Nigh, the more complex an item is like, say, pie crusts — with more ingredients and processing that requires more workers — the more likely it is to see price hikes as a result of all the little supply chain hiccups and price increases it sees along the way.

The truth is, there are lots of hidden economies that revolve around even a five-ingredient dish. Let’s dig into all of the parts that go into this reporter’s favorite dish: green bean casserole.

The side item is not a particularly difficult one to make and is very evocative of my Midwestern roots. While there are only a handful of ingredients — cream of mushroom soup, fried onions, milk, soy sauce and green beans — each is individually trying to rebound from their own battles.

Take cream of mushroom soup, for example. In a Pennsylvania town that supplies 60% of America’s mushrooms, a worker shortage means there are not enough workers to pick mushrooms before they go bad. That’s caused farmers to kill off their produce en masse at losses in the millions of dollars.

Milk, also used in the casserole, has experienced price upticks, partially due to higher costs for feed, labor and energy. The crispy, fried onions are taking the heat from cooking oil shortages, and the natural gas supplied to fry ’em up is — you guessed it — more expensive, too. Recently, the Kikkoman Corporation also announced that the price of its soy sauce will be upped for the first time since 2008 thanks to logistics fees and raw material costs. And while green beans will still be on the table, they’re on the higher end of historic prices, according to Blue Book Services.

That’s just the food itself. Then, there’s the packaging. Plastic containers are in short supply, and the paper shortage we’ve talked about before means harder-to-come-by cardboard containers.

Once those farmers, producers and manufacturers have a finished product, there are then hurdles in finding truck drivers and shipping containers (ones that don’t blow the budget) to get an ingredient or product to the supermarket shelves.

Down in Baton Rouge, Louisiana, Chef Don Bergeron has seen it all. In the past year alone, his business, Bergeron’s City Market, has dealt with COVID, floods and hurricanes. And that’s on top of supply chain issues, labor shortage and inflation.

But every year, he looks forward to Thanksgiving, as it keeps his market, retail shop and catering services busy. This year is no different.

When you have 500 Thanksgiving orders as Chef Don does, any inflation-induced price increases are particularly magnified. But he planned ahead.

On average, Chef Don sells 750 pounds of green bean casserole for Thanksgiving. This year, he began questioning whether he’d be able to, when, as of two weeks ago, he still couldn’t find any cream of mushroom soup. Though he was able to work it out with suppliers, it was a close call.

“I put out a big disclaimer to all my customers. I was like, ‘Look, I just want you all to know, you know, supply chains are broken; things are not available. And I said, ‘Some things, even though you ordered it, may not be available,’” he said. “I cook the turkey, but I do not raise the turkey.”

Chef Don said he absorbed a lot of the cost increases from inflation but has still had to raise some prices. Some of the biggest upticks have been in meats — chicken and beef especially. Customers have been understanding about the price increases though and have still flocked to Bergeron’s City Market.

“We’ve had to raise the prices across the board. But, you know, you go into stores every day, and you see the prices of things have just gone up tremendously, everywhere,” he said. “I raised my turkeys $10 a turkey this year, and I sold 25% more than last year.”

Aluminum prices have also been on the up-and-up. The specialty aluminum pans that can go from oven to table Chef Don typically utilizes tripled in price, so he nixed his usual containers.

He’s also noticed that medium and large portions of his foods have been selling well this year compared to last. That makes him happy, he said: It’s a sign that families are getting back together.