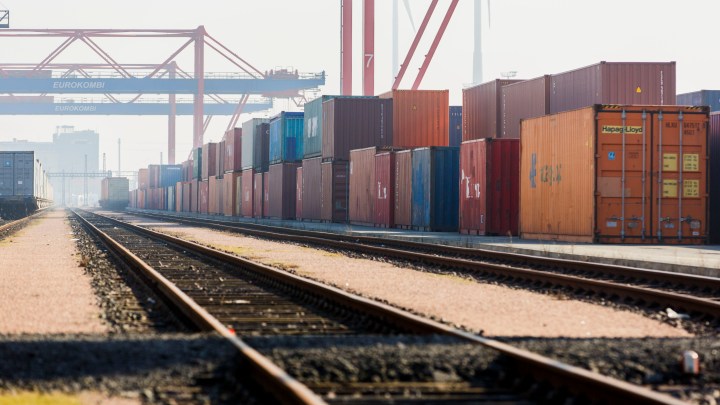 The demand for imported goods coming to the U.S. is still outpacing supply. Everything from cars to clothing and everyday items ordered online during lockdown come from abroad in metal shipping containers.

The containment measures during the pandemic impacted the global shipping supply chain, and now there aren’t enough containers to go around.

Shippers had already been feeling the squeeze when President Joe Biden issued his recent executive order urging regulators to crack down on the few shipping firms essentially controlling the market — and charging higher fees for container space.

David Lee, a partner at Genesis Resource Recycling who also manages a papermill in Sacramento, California, says that the congestion has left him unable to load his recycling material for export to Asia.

“It causes a natural hazard, a fire hazard, and safety for the yards,” Lee said, “but at the same time, I also have a huge risk in market fluctuation of goods.”

He worries that the longer his material sits around, the more value it can potentially lose.

Jessica Alvarenga, with the Pacific Merchant Shipping Association in Long Beach, is aware of the problem.

“We had a lot more vessels coming in then we were used to. We had our terminals full of containers and so they couldn’t unload them as fast as they could previously or as fast as they would like to,” she said.

When operations stopped in Asia at the start of the pandemic, Alvarenga said there were many “blank sailings,” a shipping term used to describe vessels that skip scheduled routes or ports.

Seiji Steinmetz, an economist at California State University Long Beach, explained that all the port setbacks created a bottleneck, with containers getting stuck in ports and inland railroads.

“So there are plenty of containers in the world, they just started piling up and ending up in the wrong places,” he said.

In the meantime, the container space also got more expensive. It now costs around $1,500, making it three times more expensive than pre-pandemic.

The overall effect of fewer U.S. exports has meant exports have decreased 3.5% in June.

Steinmetz predicts that the congestion will last until sometime in 2022.