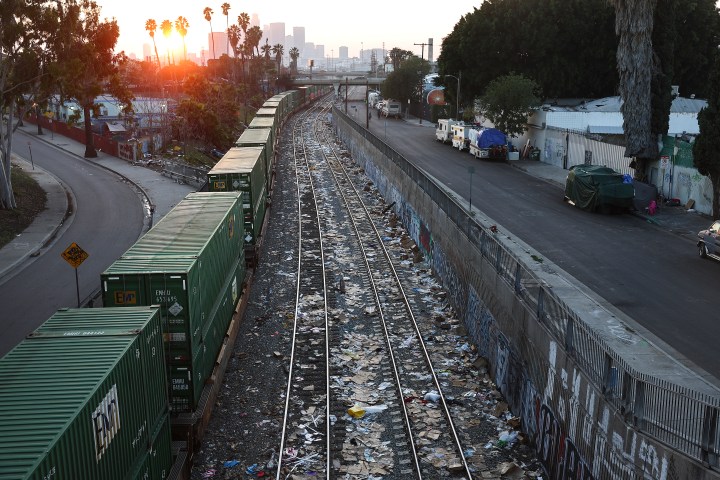 COPY
Around half of the goods we import and export touch U.S. railways. Mario Tama/Getty Images

Around half of the goods we import and export touch U.S. railways. Mario Tama/Getty Images
Listen Now

Two major unions that represent workers at U.S. freight railways are in the middle of negotiating contracts for 60,000 workers, demanding more quality of life provisions. If a deal isn’t made by Friday, the workers will strike, which would put a huge dent in the already battered supply chain. The Association of American Railroads says a nationwide rail shutdown could cost $2 billion a day.

In the meantime, U.S. railroads are stopping shipments of some cargo, either to prepare for a potential strike or gain leverage during negotiations.

We’ve all learned more than we probably expected to about supply chains over the last couple of years. Mostly in regard to ships — ships treading water at the Port of Los Angeles. A ship stuck in the Suez Canal.

Trains are how goods get from shipping ports to major distribution hubs, and vice versa. Around half of what we import and export touches U.S. railways at some point. Because even though they take longer than trucks, trains are cheaper. They cost about a quarter less.

And they’re designed to move large quantities of goods — think coal, chemicals and grains. One train holds somewhere around 240 shipping containers at a time.

“That’s going to be a lot more efficient than 240 trucks,” Miller said.

Replacing that amount of capacity is a major challenge, said Willy Shih, a management professor at Harvard. In trucking, he said, there are already serious shortages of drivers and chassis — those are the wheeled frames that hold shipping containers.

If railways suddenly shut down, stuff will get stuck wherever it happens to be. “It’s kind of a long-distance traffic jam,” Shih said.

Gene Graves is executive director of the United Shippers Alliance, an industry group. He said ports can only store so much.

It means there’d be lots of ships backed up, ships full of clothing, cars and couches floating in the Pacific Ocean.

“Which would literally disrupt the whole supply chain,” Graves said.

And by now we know what happens next. Manufacturing slows down, and the cost of goods goes up.

It’s unclear how likely a rail strike is. The last major one occurred in 1992, and the federal government stepped in and forced everyone back to work. The whole thing lasted two days.