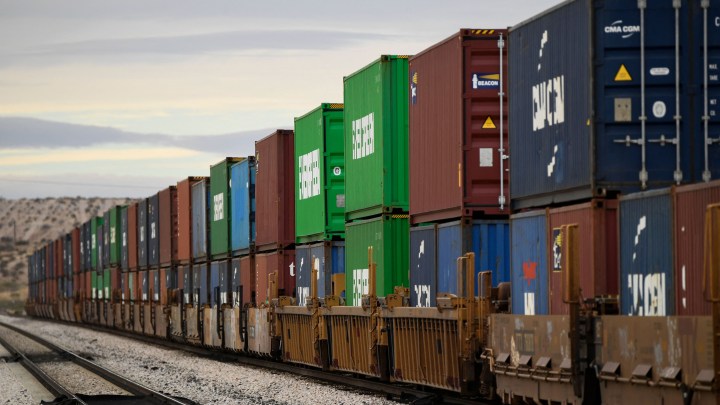 The biggest freight railroads in the country are reporting their second-quarter financial results this month. The almost $80 billion business is dominated by seven major rail lines, known as Class 1. They’re facing a number of hurdles right now — some of their own making, some out of their control. What happens on the rails can have a ripple effect because freight trains are the bloodstream of the economy, circulating products throughout the country.

They carry imports from China, new cars, even chicken feed. Foster Farms, a chicken grower and processor, needs four Union Pacific trains full of corn feed per week for its California operations. But, starting in February, not all the trains were showing up.

“And if you have that happen for enough weeks in a row, eventually you run out of your reserves of corn, and then you start just depending on the next train to arrive in time so that you don’t have to depopulate,” said National Grain and Feed Association chief economist Max Fisher, using a polite term for slaughtering chickens so they don’t starve.

Fisher said government regulators ordered Union Pacific to improve its service to Foster Farms. But other grain, ethanol and chemical shippers are still having problems. Fisher estimates that rail service issues cost the grain industry more than $100 million in the first quarter of this year. The rail lines are in a quiet period ahead of their quarterly reports and wouldn’t comment. But Ian Jefferies, head of the Association of American Railroads, was willing to talk.

“So without a doubt, rail service is not where we want it to be or where some of our customers expect it to be, and we’ve been working hard to reduce the backlog of shipments on the grain front,” he said.

Jefferies said part of the problem is the rail lines can’t find enough workers. And no one could have predicted the pandemic, he said, or the resulting supply chain snags.

Sandra Dearden is a former freight rail executive who started her own consulting company. She said Jefferies has a point.

“There’s some issues that were out of their control, but at the same time some of the decisions they made prior to the pandemic contributed to the problems that we have today,” she explained.

Dearden said the major freight rail lines started laying people off even before COVID hit the U.S., eventually getting rid of about a third of their workers. The layoffs were supposed to make the railroads more efficient. Marty Oberman is chair of the Surface Transportation Board, which regulates freight rail. He said the railroads slimmed down to appeal to investors.

“It wasn’t essential that they operate this way. I think it was instigated by pressures from Wall Street. It’s really hard to call it anything other than greed.”

But Jefferies, of the Association of American Railroads, said the freight lines have to make money so they can maintain miles and miles of track and other infrastructure. This debate, and all the complaints about freight rail, came to a head last April at a Surface Transportation Board hearing, according to Oberman.

“We have a lot of authority to hold the railroads’ feet to the fire, which is what I think we should be doing. And to keep the spotlight on them. And that can be a powerful tool,” he said.

Oberman said that for now, the biggest freight rail lines have to report every week on their progress toward faster, more reliable service.