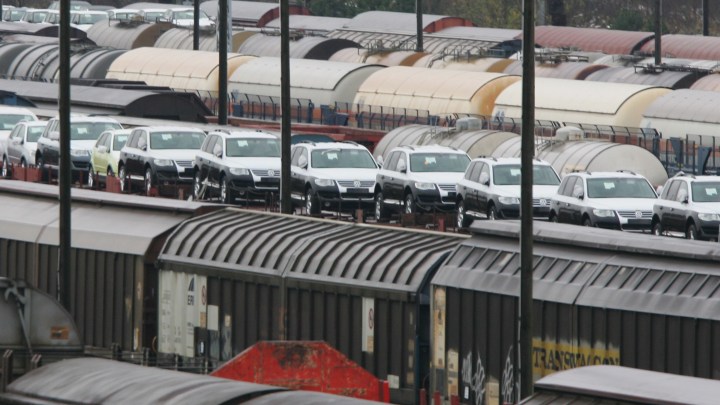 COPY
Following the shipping bottleneck in the Port of Los Angeles, Chicago railyards are now experiencing their own backlog. Andreas Rentz via Getty Images

Following the shipping bottleneck in the Port of Los Angeles, Chicago railyards are now experiencing their own backlog. Andreas Rentz via Getty Images
Listen Now

If you go to the Chicago History Museum, you’re going to see a lot of trains.

Ever since Chicago was founded, Ruck said, it’s been about transportation — first by water, then by rail.

And that makes sense; it pays to be in the middle of the country. These days, all of the seven U.S. Class 1 railroads — the freight lines with the biggest revenues — pass through Chicago.

“You might not think of it if you live in New Jersey or you live in California, but live in either one of those places, chances are the material that you’ve gotten has made its way through Chicago by rail,” Russick said.

When container ships started backing up in the ports of Los Angeles and Long Beach, overwhelmed by a surge in demand for goods from Asia, Ari Ashe from the research company IHS Markit was already expecting a ripple of delays.

“It was inevitable,” Ashe said. “There was absolutely no way to see what happened in Los Angeles and Long Beach and not have a situation in Chicago.”

The situation is a backlog of containers waiting to get loaded onto trucks in Chicago. Some railroads have had to cut back on shipments to the hub and even pause them.

At this point, with retailers already stocking up on holiday items, Ian Jefferies, president of the Association of American Railroads said his members are expecting the crunch to last.

“They expect this level of volume to continue through the end of the year,” he said.

If demand stays hot, Ashe from IHS Markit said shippers may look for another option altogether.

If you don’t want to be in Chicago, you go to Memphis. But Memphis is already backlogged and could quickly get as hectic as Chicago, Ashe said.