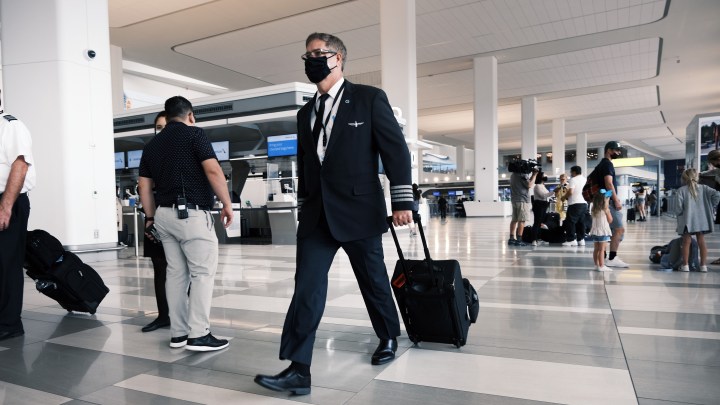 COPY
A pilot walks through LaGuardia Airport in New York before the Fourth of July weekend. While Americans are traveling again, airlines are struggling to train and retrain staff. Spencer Platt via Getty Images

A pilot walks through LaGuardia Airport in New York before the Fourth of July weekend. While Americans are traveling again, airlines are struggling to train and retrain staff. Spencer Platt via Getty Images
Listen Now

There are a whole lot of people traveling these days in the U.S. Airports are packed, flights are packed. And the speedy return of domestic travel has many airlines scrambling to bring back — and hire — enough staff.

American Airlines said this week that it’s calling back all 3,300 flight attendants who’ve been on voluntary leave, in addition to hiring 800 more. Airlines are also bringing back pilots who’ve been on leave, and they’re looking for new ones.

But getting them flying again could take a while.

It wasn’t that many months ago that American Airlines Capt. Dennis Tajer was flying 737s with just four or five people on board.

The not-so-great news, he said, is that there aren’t nearly enough pilots or crew to fly those planes.

“It went from a lack of demand from passengers to a lack of supply for pilots overnight, like a light switch,” Tajer said.

And there’s no similar switch that airlines can flip to replenish that supply of pilots.

“The challenge is that you know, creating a pilot and bringing a pilot back isn’t something that’s instantaneous, right?” said Simon Azar of CAE, a company that makes flight simulators and trains pilots. “If you want to create a pilot from scratch, it takes two to three years to be able to get them into an airline seat.”

Getting pilots who’ve only been off the job a few months or a year qualified to fly again takes time too, said Richard Aboulafia, an aviation analyst at Teal Group.

“The aviation industry, of course, has a fairly high level of credentialing, of training that’s required,” he said. “Really at all levels, you need to reach a certain level of proficiency that is monitored by the government.”

And right now, a lot more people than usual need to be retrained — or trained for the first time.

That’s creating a logjam, according to Tajer, who’s a spokesperson for the Allied Pilots Association, the pilots union at American Airlines. There are only so many flight simulators and instructors.

“We have eight or nine Airbus simulators and a handful of 737 simulators. We call it the box. And you can’t get time in a box if you don’t have the box,” he said.

Because of all this, Tajer said, that pilots and crews who are trained are working more than ever.