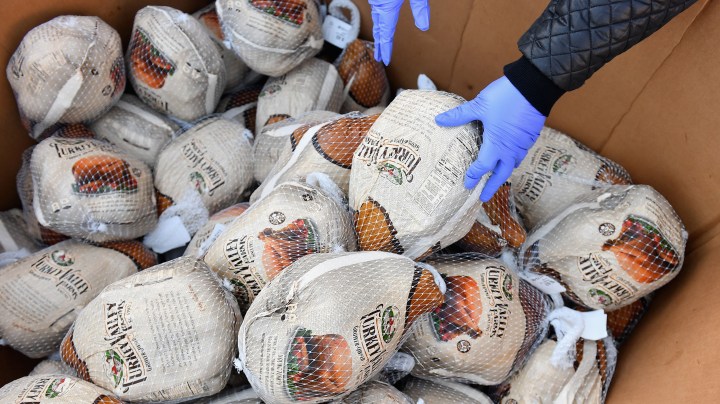 COPY
The cost of turkey feed is higher this year, contributing to the expected higher cost of serving a Thanksgiving dinner. Angela Weiss/AFP via Getty Images

The cost of turkey feed is higher this year, contributing to the expected higher cost of serving a Thanksgiving dinner. Angela Weiss/AFP via Getty Images
Listen Now

New data from IRI, a firm that tracks product availability, shows the stock of holiday favorites like whipped topping, liquid gravy and frozen pies falling as much as 11% compared to this time last year.

For you to feed your family a big Thanksgiving turkey, first the turkeys need to be fed.

“A Thanksgiving turkey eats probably between 70 and 100 pounds of feed before it goes to the plant,” said Brock Stein, president of Koch’s Turkey Farm in eastern Pennsylvania.

The price of feed — mostly corn — is up more than 50% from last year. Plus, the birds are eating more because production is running slow. On top of that, the company’s processing plant is understaffed, and trucking is a problem.

Which means turkeys at the grocery store may be bigger this year. Stein’s raised wholesale prices 10%. But it’s not just turkey that’s getting more expensive. It’s also bread, pies and cakes.

Robb MacKie at the American Bakers Association said members have been telling him, “From ingredients to packaging to equipment, electricity, distribution and workforce costs, 49 of the 50 input costs that they track were up — many of them are up double digits.

A lot of baking ingredients are stuck on those container ships waiting at ports, MacKie said. Did you know the U.S. imports about 80% of its wheat gluten? So much for amber waves of grain.

Even if all of the growing, the harvesting, the processing goes right, you can’t put a product on the shelves if you have nothing to package it in. Aluminum costs are up almost 90%, per Katie Denis at the Consumer Brands Association.

“What that means is your canned cranberry sauce that makes that great sound when it slides out is going to cost a little bit more,” Denis said.

Now, there’s no reason to panic buy. Everyone I spoke to for this story said there won’t be a shortage of turkeys or trimmings this year. But they’ll likely cost more, and you may have to be flexible in the choice of brands.

And, though this may be a controversial take, if all else fails you could always make the cranberry sauce from scratch.