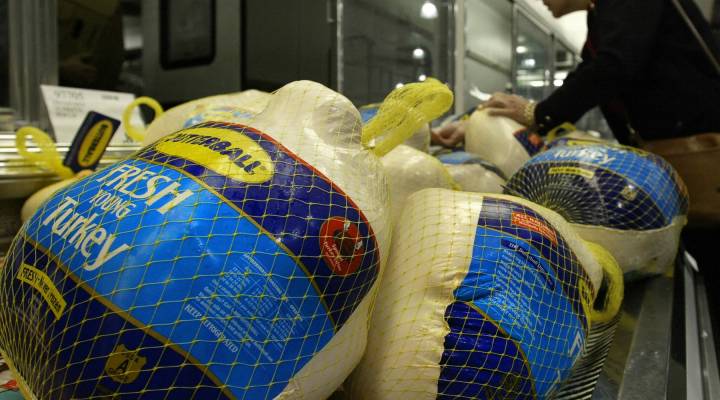 A customer looks over turkeys for sale at Costco, 2004.  PAUL J.RICHARDS/AFP/Getty Images

A customer looks over turkeys for sale at Costco, 2004.  PAUL J.RICHARDS/AFP/Getty Images

If you’re one of the tens of millions of people planning to go shopping this weekend, Thanksgiving might seem like another big-ticket line item on your bloated holiday budget. How many bottles of wine per person?

But the American Farm Bureau Federation’s annual Thanksgiving survey sets a different kind of dinner table. This dinner is a little more humble. It’s alcohol-free, and cheaper than it’s been in years. It’s useful perspective on what a feast can be for families around the country.

According the Farm Bureau, the average cost of a Thanksgiving dinner for 10 is $48.90, less than $5 per person and down slightly from last year. That’s the average bill from 166 shoppers spread across 37 states, reporting the best deals they can find from a list that hasn’t changed since 1986.

The total’s been down for several years now, thanks to low turkey prices, and when you adjust for inflation it’s stayed relatively flat. Here’s the full shopping list, with this year’s average prices.

“Shoppers with an eye for bargains in all areas of the country should be able to purchase individual menu items at prices comparable to the Farm Bureau survey averages,” the organization says.

CNBC put that to the test around New York City, where one would expect prices to be higher. But a reporter was able to get everything for a feast at around $100 at Whole Foods and $45 at Walmart, albeit from a different, arguably more modern list.

Of course, everyone’s feast looks different, and other informal surveys point to a much more expensive holiday. The Marketplace listeners who responded to our poll pegged the cost at several times higher than the Farm Bureau average.

For decades, the American Farm Bureau Federation has been calculating the average cost of a Thanksgiving feast for 10 (alcohol not included). ? Without looking, can you guess the total?

LendEDU started administering a Thanksgiving survey last year, and found the average American will spend $175.65 this year, up about $10 from last year and including other expenses like travel.

In its survey of people hosting Thanksgiving dinner, LendingTree found the average feast feeds 11 guests, and hosts spend $251 on food and another $83 on dishes, decorations and other supplies.

That survey also asked respondents how much work they were missing. Those who took time off sacrificed some $587 in wages, on average. More than a quarter of hosts said Thanksgiving was a financial strain, but 76 percent of hosts also said they loved doing it.

Is there any better lesson for the holidays? Whether you’re serving an organic heirloom bird or a frozen Butterball, it’s important to weigh your emotional cost too.

Turkey prices are down again this year